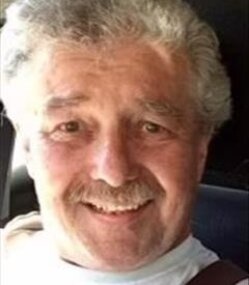 Eastport – Pepper Smith died Friday, October 15, 2021, at his home in Quoddy Village of Eastport, ME. Pepper was born in Newburg, New York on October 5th 1942 to George and Jane Smith. He had one brother, Richard. The family later moved to Poughkeepsie, New York where Pepper graduated from High School.

Pepper lived a colorful, carefree life. As a young man, he had a drifter’s spirit, making a life of adventurous travel where he made his way from New York to Florida and back again. It was on these adventures that he found his special craft as a mason. He had dreamed of settling in Maine and in 1978 made his way from New Mexico to Wesley, Maine where he built a home and started a family.

Pepper has been a resident of Quoddy Village of Eastport, for the last 35 years, where he lived in the home that he loved. He is known throughout Washington County as a skilled mason. His work is reflected in several of the brick buildings that represent the downtown areas of both Calais and Eastport. Many residents display his work in their chimneys, walkways, and special fireplaces. For many years he advertised his work in the Quoddy Tides as “One man, One trowel”. He retired from his craft at the age of 73.

His family remembers him not for what he did but for who he was, a compassionate and honest man, with a unique perspective on life. He was an avid lover of all living things with a warm heart and a gentle soul. Pepper was a creative inventor, a brilliant story teller with a language all of his own. Pepper was most memorable, to those who knew him, as a charismatic character who unknowingly made lasting impressions.

Pepper was predeceased by his parents, George and Jane. Survivors include his children, Desiree Bassett and her husband Philip “1-L” of Pleasant Point, ME. Meagan “Mea-goon” Smith of South Portland, ME., Obadiah Smith and his wife, Misty of Fort Edward, NY. He leaves behind 6 grandchildren, Justice “Walker”, Nedra “Sugar”, Philip “Booboo”, Sebastian “Billy-B”, Suvi May and Obadiah Jr. He also leaves his beloved dog Bruno and his loyal friends James Young and Cynthia Campinell “Duel”.

Happily, Pepper knew the Lord Jesus Christ as his personal savior, and we are happy that he has claimed his reward. He is not “Resting in Peace” but rather rejoicing loudly in God’s presence.


To order memorial trees or send flowers to the family in memory of William "Pepper" Smith, please visit our flower store.