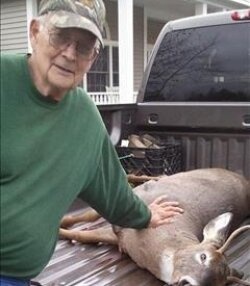 Baileyville – William Louis Roehrich Jr., 79, passed away Saturday, May 21, 2022 at Down East Community Hospital in Machias With his Family by his side. Bill was born in Summit, NJ on April 29, 1943, son of William and Lillian (Merfert) Roehrich.

Bill graduated from Westfield High School in New Jersey, Class of 1960, and worked for his uncle’s business, Water Works Specialist, and for Krinko Corporation in the warehouse. On November 16, 1963, he married the love of his life, Carol Wescott. They took a vacation in Maine and absolutely fell in love with the area and in 1966 made Baileyville their home. Bill worked at Georgia Pacific for ten years, Thomas Dicenzos as a steel fabricator, and then as the Public Works Director for the Town of Baileyville, retiring in 2006. He was an avid outdoorsman and enjoyed hunting, fishing, four wheeling, camping and spending time at his cottage on Squirrel Point.

A celebration of life will be held at 1277 Houlton Rd, Baileyville, Maine on May 28, 2022 from 2pm-4pm. Arrangements by Mays Funeral Home, Calais & Eastport.


To order memorial trees or send flowers to the family in memory of William Louis Roehrich Jr., please visit our flower store.