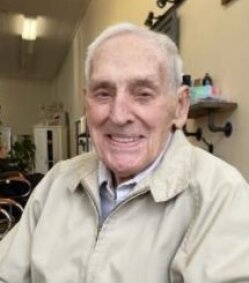 Bill graduated from Shead Memorial High School in1944 before enlisting in the Army in March 1945. After completing basic training, he was assigned to the Headquarters Detachment 719th Engineering Base Department, Office of the Chief Engineer, where he achieved the rank of Technician 4th Grade. Bill was awarded the Asiatic Pacific Campaign Medal, the Philippines Independence Ribbon, and the World War II Victory Medal and received an Honorable Discharge in December 1946. After returning home from the Army, Bill worked in various jobs supporting his family. These included working at the local Woolen Mill, as a plumber with Ralph Ray, among other jobs, before he became a local mail carrier in Eastport and then a rural carrier. While working full-time and raising a family, Bill earned his bachelor’s degree at University of Maine at Machias in May 1975 and then his MBA at University of Maine at Orono in August 1975. In 1977, Bill took a job at the US Postal Headquarters in Washington, D.C. as a mathematical statistician and moved his family to Maryland. Bill cared deeply for his family, and he strived to provide opportunity and education for his daughters.

In addition to his parents, William was predeceased by his sisters, Clara Kinney, Catherine Marini and brother, Carroll Robinson; stepsister, Helen Robinson and his stepbrother, Raymond Robinson.

He is survived by his wife, Gretchen (Gould) Robinson originally of Princeton; three daughters, Rebecca Robinson and her wife Melissa of TX, Kelli Robinson of Rockland and Billi Cordero and her husband, Rudolph of CA; four grandchildren, Christopher Garner of MD, Zachary Garner of Sweden, and Samuel and Matthew Robinson, both of TX; several nieces and nephews and many friends.

Bill will be laid to rest at Bayside Cemetery in Eastport at 2:00 pm on Sunday, October 10th, with Tessa Ftorek, officiant. Arrangements by Mays Funeral Home, Calais & Eastport.
To order memorial trees or send flowers to the family in memory of William Arthur Robinson, please visit our flower store.