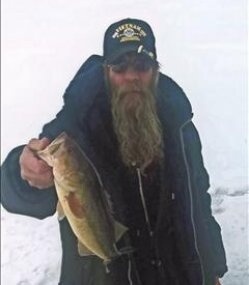 Baileyville – William “Billy” Leighton, born July 23, 1953, passed away with his family by his side on Wednesday, December 22, 2021 after a battle with cancer. As with everything else he has ever done, he faced it with courage and dignity.

During his school years, most of his spare time off he spent with his grandfather helping him. Bill learned so much and he loved his “Papa” very much. He carried on much of what he learned into his adult life. Bill graduated from Calais High School, after which time he joined the U.S. Navy and until his passing was a very proud veteran. He held many jobs through the years including Dicenzo, Georgia Pacific, Domtar, C&G Trucking - along with these jobs he was always ready to help others with whatever they needed. If he didn’t know how to do something he figured it out.

He stayed busy after retirement doing things around home, never would sit still for very along, a lot like his mom in so many ways. Bill was predeceased by his parents, dad John Leighton, mom Lynn Leighton Hill; grandparents Cecil and Helen Leighton, and Roe and Lena Fickett; sister Doreen Sawyer; nephew Brian Turner; and his former wife Sandy Bailey Leighton. Surviving are his wife Linda Sinclair Leighton and sons Kevin and Erick; his son and daughter-in-law Trevor and Neomi Leighton; his much-loved grandbabies, Andrew and fiancé Summer, Maygin, Sheayn and Jemah; his brother-in-law Tom Sawyer and family; brother Tom Leighton and family; sisters Laura and family, and Sandie and family; mother of his son Betty Libby; and nieces and nephews. He was loved by so many very special people in his life who he has often said many times how much they have done for him, his dear friends Moses and Susan Cilley.

The family would like to thank CHCS Hospice with a special thanks to Melanie, Britney, Kelly and Jane, his providers and advocates; and his grandbabies who held his heart for helping with his care. Also thanks to Savanna Bailey and family and Julie Leavitt and family for your love and support.

In the spring or summer he has requested a huge bonfire and barbeque in his honor at Trevor’s on the farm for his family and friends. The date and time will be posted at a later date. Donations in Bill’s memory may be made to Sarah’s House of Maine, 346 Main Rd, Holden, ME 04429, or a charity of one’s choice. Arrangements by Mays Funeral Home, Calais & Eastport.

To order memorial trees or send flowers to the family in memory of William Blair Leighton, please visit our flower store.