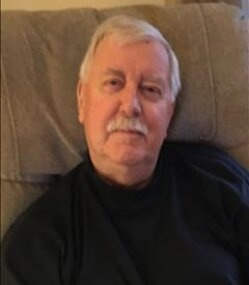 Stick graduated from Calais Memorial High School with the great class of 1965. After graduation he worked for Stone and Webster in Baileyville before beginning his career at Georgia Pacific paper department where he worked for the next 25 years. He served as paper mill superintendent his last five years. After leaving Georgia Pacific he joined Geschmay Wet felt of Greenville, SC as a Sales/Service Representative for 5 years. He then joined JWI as a Regional Manager for New England/Eastern New Brunswick territory for the next 4 years until his retirement. One of the many things on Stick’s bucket list was to work at L.L. Bean which he managed to do for 9 months after his retirement and “had a ball”. In 2003, he joined the team at UPS and worked until his official retirement in 2018.

While working with Georgia Pacific Stick was very active in UPIU Local 27, serving as treasurer and Vice President over the years.

In addition to his parents, Stick was predeceased by his wife of 37 years, Katherine M. Clark (McShane), and his son Kirk Willis Clark. He is survived by his son Peter M. Clark and wife Angela; daughter Patricia and husband John Wentworth; granddaughters Nicole Clark and Sarah Katherine Wentworth; and grandson Zachary Wentworth. He is also survived by his significant other Jo Shannon; his sister Phyllis Carr and husband Gary; and brother Kenneth Clark. Stick is also survived by numerous nieces and nephews as well as many dear treasured friends.

Over the years some of Stick and Kathy’s favorite times were spent at Lilly Lake with the very special McShane family. They enjoyed celebrating birthdays, weddings, anniversaries, spaghetti feeds, and numerous other life events. Some of Stick’s favorite holidays included Easter, Thanksgiving, Boxing Day, and International Festival gatherings. He enjoyed spending these holidays with family and special friends. Many great stories have been shared over the years.

In keeping with Stick’s wishes, there will be a graveside service 1 p.m. Saturday, August 28, 2021 at the Calais Cemetery. Arrangements by Mays Funeral Home, Calais & Eastport.

To order memorial trees or send flowers to the family in memory of William F. "Stick" Clark, please visit our flower store.