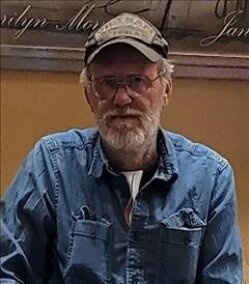 Wilfred, Joey, Joe, Jo-Jo, Willy or Uncle Joe…..depending on where or how you met/knew him depended on what you called him. We will call him Joey……

Most everyone that knew Joey, knew that he was not well. He tried to pretend that nothing was wrong, in fact he always said the reason he was still living was because he didn’t go to the doctors!

Sadly, when Joey laid down to take his daily nap yesterday, his weary body didn’t have the energy to wake him up…he didn’t wake up….not here…..

We imagine he was dreaming that he was outside, sitting on his Harley, having some cold Budweiser’s and a cigarette or two, watching his dogs play in a field, without a care in the world or maybe he was watching the deer in the field…..

We imagine our brother David, who passed just 6 days earlier, came by and told him “Joey, it’s true, there is no pain here.”

We imagine our father Wilfred (Willy) appeared and said “Joe, I know you are hurting and tired, I am here for you.”

We imagine our brother Michael appeared and said “Hey Joe, you don’t need or even want beer and cigs here!

We know Joey must have felt the love and warmth of our grandparents: Henry & Alice Doucette, Arnold & Lila Vowles, Harland Harris, our Step-father Frenchie and many aunts, uncles, and cousins and of course Big Ed.
We know how happy he was to see his special friend Dick Grebe and so many others.

He did not want to leave us, he had so many more plans. But, it wasn’t his choice to make… his body made the choice for him. Just as that choice was made for his Son, Dad, Mike and David.

Joey was born on July 3, 1954 in Old Town Maine, the first child of Wilfred and Shirley (Harris) Doucette. He was so little, he slept in a shoe box, he wasn’t expected to live through the week!

The family moved to Fishers Island NY in 1967. It is there that Joey attended school and graduated in 1972 and then enlisted in the United States Air Force. He was so proud to serve his Country. He loved to bring all his new friends to ‘the Island’ and show them the small little place he grew up.

After the Air Force, Joey became a very skillful finish carpenter, with his artistic abilities and visions he created beautiful pieces. Some of his best work could be seen in bars and restaurants he helped remodel in New London, Ct. like the Playpen Café and the Captain’s Inn which he was so very proud of. He earned his black belt in Tae Kwon Do, which was another great accomplishment for him.

When Joey became a daddy in 1984 he was over the moon! He had never felt love like that. Joseph Allyn Marshall Doucette was his son, you couldn’t wipe that smile off his face! But things didn’t work out the way they were supposed to. He lost contact with his son and it changed his world, not for the better.

He moved to Maine in the late 90’s to be near family. When he had to give up his Harley, reality started to set in. It became evident that his body was failing and it was limiting his abilities.

But, Joey had a phone a phone book and a great memory! As many of you know, Joey liked to call and talk…..about anything and everything. He was very blunt and to the point and not afraid to state his opinion!

Joey made friends pretty easily and the friends would become lifelong friends. He may not have talked to you for years, but then would call and pick up a conversation as if you had talked just yesterday!

In 2009, Joey was informed that his son had been killed in an automobile accident, while on his way to Maine to see Joey. To be so close to reconciliation then have it taken away so brutally was devastating, a devastation that a parent doesn’t easily recover from.

Joey was a member of the American Legion, first on Fishers Island and most recently Machias Legion Post #9. He loved the pull-tabs. He loved talking to the bartenders, the other patrons, and of course drinking Budweiser.

Joey had another love….his car a 2014 Dodge Challenger. He didn’t care if he could drive it or not…it was his car and he was happy to just look at it. He was just as happy to be riding in the passenger seat (depending on who was driving J).

If you get a call from an unknown number, and there is nobody on the other end…..make sure you tell Joey you know it’s him and you are happy he is no longer suffering and you might mention you heard his new teeth look great!

Yes, it is true Joey didn’t wake up in his house after his nap but, we are sure that when he woke up on the other side, he woke up a new man. We are sure he is riding that Harley like he never had before!

Ride that Harley, Joey!
To order memorial trees or send flowers to the family in memory of Wilfred "Joe" Doucette, please visit our flower store.