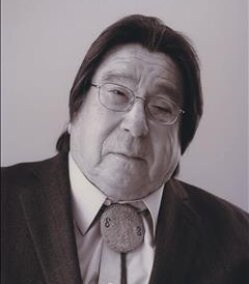 Indian Township – Wayne A. Newell, 79, passed away Thursday, December 23, 2021 at his home surrounded by his family. Wayne was born in Pleasant Point on April 16, 1942, son of Aloysius and Adelaide (Soctomah) Newell.

After graduating from high school in Eastport, Wayne was employed as a studio cameraman at WABI in Bangor. While working in Bangor, he met his love, Sandra Clark, and they were united in marriage on January 6, 1968. He dedicated his energies to the tribal community development during the civil rights movement in the sixties. His work included development of youth groups, traditional basket making and crafts coop, and worked to secure funds for indoor plumbing for all Passamaquoddy homes.

In 1969, Wayne was selected as one of twenty recipients of the Ford Foundation’s Leadership Development Program which took him to many Native communities throughout the United States and Canada working with the U.S. Dept of Commerce Economic Development Division. He also assisted in the formation of an alternative school program for Native student dropouts within the Wabanaki region of Atlantic Canada, Quebec and Maine.

In 1970, Wayne was selected as a U.S. Office of Education Fellow to do research in the field of Education. Wayne declined this appointment so he could attend Harvard University Graduate School of Education from which he earned his master’s degree in Education in 1971.

From 1971 to 1978, Wayne directed the first bilingual/bicultural education program for Indian Township. During this time, he authored or co-authored over forty books written in the Passamaquoddy/Maliseet language. From 1978 to 1987, Wayne was asked to set up a tribal health delivery system with the Indian Health Services. He was instrumental in bringing medical and dental staff to the tribal community. From 1987 until 1988, Wayne served as a tribal planner with the Indian Township Tribal Government.

In 1988, Wayne decided it was time to return to teaching at the Indian Township School, a position he truly loved. He was appointed by both President Jimmy Carter and President Barack Obama to serve on the National Advisory Council on Indian Education; was appointed as one of five original members of the Maine Human Rights Commission by Gov. Curtis, served on the negotiation team for the Maine Indian Land Claims Settlement of 1980, two terms in the Maine Legislature as the Passamaquoddy Tribal representative, for over 27 years served as President of Northeastern Blueberry Co., lecturer on multiculturalism, served as a member of numerous boards with hospitals, museums, schools and civic organizations, was awarded a distinguished achievement award by the University of Maine Machias, committee member at University of Maine at Orono to develop a Native studies program, was honored by the Passamaquoddy community and the U.S. Bureau of Indian Affairs in the field of Native Education, served two terms to the Indian Township Tribal Council and the Passamaquoddy Joint Tribal Council, appointed to the Maine Indian Tribal State Commission as one of the only two Passamaquoddy tribal members to oversee the implementation of the 1980 Land Claims Settlement Act, appointed to assist the Maine Department of Education in the development of a Native studies curriculum, appointed by Secretary of Interior to serve on the rule making committee of “No Child Left Behind,” and was the first Wabanaki Tribal person to serve on the University of Maine System Board of Trustees. After writing over 40 books in Passamaquoddy, Wayne wrote his first book in English in 2021, titled Kuhkomossonuk Akonutomuwinokot, Stories Our Grandmothers Told Us.

Wayne was proud of his Passamaquoddy heritage and will be remembered as an educator, storyteller, author, and singer of Passamaquoddy music.


To order memorial trees or send flowers to the family in memory of Wayne A. Newell, please visit our flower store.