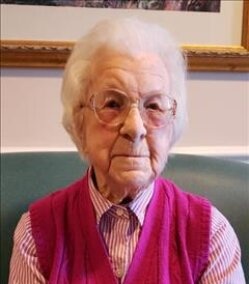 Machias - Virginia “Ginnie” P. Foss, 102, passed away peacefully on Wednesday, December 15, 2021, at Washington Place in Calais. Virginia was born in Machias on September 23, 1919, daughter of Fred and Mildred (Bridges) Pennell. She was the youngest of eight children.

Virginia was raised in Machias and graduated from Machias High School in 1937. In 1942, she married Warren Foss, Jr and went on to have 3 children, Beth, James, and Judy. Virginia had several jobs over the years but worked for many as Clerk of Courts at the Machias Court House. She is probably most well remembered as being a bank teller at Machias Savings Bank, where she went on to retire twice from. Virginia had many friends and used to love to get the “girls” together to play cards, go to the local dances, and also loved to bowl, participating on a bowling team for many years. She had always lived in Machias and spent over 35 years at Louise Gardner Apartments until, at the age of 98, she left for Washington Place Assisted Living in Calais.

Virginia was loved by all who knew her, and her death will leave a void in her family’s hearts.

A graveside service will be held in the spring at Longfellow Cemetery in Machias. In lieu of flowers, donations may be made in Ginnie’s memory to a charity of one’s choice. Arrangements by Mays Funeral Home, Calais & Eastport.

To order memorial trees or send flowers to the family in memory of Virginia Pennell Foss, please visit our flower store.