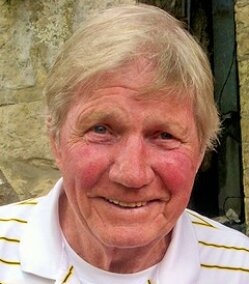 On Dec. 21st, he made his scrumptious cheesecake as a Christmas gift to his chosen family of friends, the Jamiesons. That evening he enjoyed a festive dinner with his friend, Irene Galway. The next morning, Dec. 22, 2020, Vincent John Caleskie, lover of the sea, dogs, good books, and good music- particularly jazz, of cooking, good food, good wine and especially the conversation that went with it, armchair philosopher, yarn-spinner, and knitter, trout fly-fisher, and self-taught trombonist, passed from his earthly to his spiritual home. Those who loved him would agree he was a nuanced man who enjoyed a good laugh and had a big heart, which, at 92, finally gave out.

Vincent was born Oct. 3, 1928 to Beatrice and William Caleskie, the second oldest of 4 children, and nicknamed “Billy”. He always tried to be there for his family whenever needed. He grew up in Ridgewood and Waldwick, NJ. A graduate of St. Luke’s High School in Hohokus, NJ, he was recruited to play football at a local college, but shortly found he preferred the school of life. It led him around the world and ultimately to the place he loved, Maine. He found good companions to share his life with along the way.

Vince met Emily D’Onofrio Caleskie while lifeguarding in Seaside Heights, NJ. They married in 1950 and moved to FL, where he worked for a freight trucking company. He served in the Marines during the Korean War, becoming a sergeant training troops at Parris Island, SC and later an airplane mechanic at Cherry Point, NC. After his honorable discharge in 1953, he joined the police force of Farmington, CT, stationed in Unionville, CT. Their 3 children- Irene Mary, Debra Ann, and Marianne- were born there. Vince then went into the commercial transport insurance field with Transport Insurance Co. of Dallas, TX. He eventually became their investigative and loss prevention expert. They relocated to Florissant, MO, Milford, MA, then Duxbury, MA, where the family built a home of his design. Shortly afterwards, in 1970, the couple separated, divorcing over a decade later. Through the years, Vince became recognized nationwide as an authority on truck and terminal security. In 1973, a device he invented to decrease mid-route truck hijackings was patented. His reputation landed him in Valdez, AK with Alyeska as their safety supervisor for Phase 1 of the Alaskan Pipeline. That led him to a similar position with Aramco in Saudi Arabia. Vince continued his career as Dir. of Loss Prevention with Baldwin and Lyons of Indianapolis, IN, and later with Carolina Casualty, while living in Indianapolis. There, he met lifelong friends Greg Bonnell, Jeff Davis, Ed Hodgdon, Sandy Dunn, and Bettie Pennell, among others. He and Bettie were married until retirement, when life led them in different directions. After caring for his mother in his home until her death, Vince moved to Maine. He purchased land along the coast in Dennysville, which he dubbed “The North 40”. There, he designed and helped build a chalet-type home. Vince began snow birding to Tucson Estates, AZ, with a friend from his Indianapolis jazz band days, Carole Kistler. Eventually, he sold his place in ME and purchased one in Pinetop, AZ. However, it wasn’t long before his spirit compelled his return to his beloved Maine, where he settled in Calais.

Vincent is survived by his 2 daughters, Irene (James) Heinert of Sturgis, SD; and Debra (Robert) Jewell of Franklin, TN; 4 grandchildren; and 4 great grandchildren; his sister Alice (Don) Johnson of Pittstown, NJ; and many nieces and nephews. He is predeceased in death by his parents, daughter Marianne, sister Margaret Cerni, and brother Robert Caleskie.

As he was fond of saying, “No matter where you go, there you are” - Happy Trails, Dad and friend!

A small gathering of family and friends will honor Vincent with a funeral Mass, May 24, 2021 at St. John the Evangelist Church in Pembroke at 11 a.m. Burial will follow at the Dennysville Cemetery.

To order memorial trees or send flowers to the family in memory of Vincent J. Caleskie, please visit our flower store.