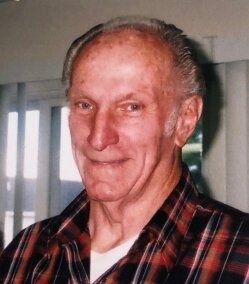 Princeton - Truman Oswald Day, 88, passed away August 23, 2019 in his home in Princeton, after a long illness. He was with the woman he loved and adored, his wife Eva.

Truman was born March 19, 1931 in Wesley to Rupert and Gertrude Day. He served in the National Guard where he was a chef. He worked for many years in the woods with his brother Leland “L.C.” Day; as a welder; and then for many years drilling wells for Lawrence Lord. Truman met the love of his life, Eva Nora Day (Sawtelle) and they were married in 1951. They had two daughters, Sally and Sharon. Truman was a lifetime member of the Wesley Grange.

Truman was an avid card player, loved to dicker over buying and selling used cars, and made the best poached eggs you ever had. He loved spending time with his wife and their large family and could always make everyone laugh with his stories. Truman was an animal lover who always had cats and dogs (usually a Basset Hound) around the house. He also loved to watch and feed the birds and squirrels in the backyard.

Truman was predeceased by his parents, his brother Leland “L.C.” Day, and his sister Marice Chaffee (Day).

At his request there will be no service. Eva will be hosting a small family Celebration of Life at their home on Saturday, September 7.

Anyone who wishes can make a donation to a charity of their choice (Truman was a supporter of Veteran and animal charities) in Truman’s name. Arrangements by Mays Funeral Home, Calais & Eastport.
To order memorial trees or send flowers to the family in memory of Truman Oswald Day, please visit our flower store.