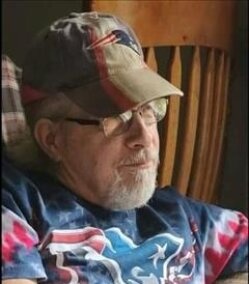 Perry – Thomas Joseph Champagne, 72, passed away unexpectedly at his home on Saturday, January 1, 2022. Thomas was born in Willimantic, CT on August 11, 1949, son of Omer and Marguerite (Bunnell) Champagne.

After graduating from high school, Thomas enlisted in the U.S. Navy, serving as a Gunner’s Mate during the Vietnam War on the USS Wainwright (DLG28). Following his service, he returned home to Connecticut and worked at American Thread Co and the Sheraton Hotel. Thomas met Beverly Jurewicz and they were united in marriage on December 21, 1982. They eventually moved to Eastport where Thomas worked with his father-in-law at Quoddy Village Electronics repairing TVs and radios, as well as installing satellite dishes. He then worked for Walmart in the electronics department until retiring in 2010. Thomas enjoyed going to the beach, gardening, fishing, listening to all types of rock music, playing video games and watching football, especially the Patriots.

Thomas was predeceased by his parents, Omer and Marguerite; and his father-in-law, Daniel Francis, who treated him like a son. Surviving are his wife Beverly Champagne of Perry; four children, Elizabeth Champagne and companion Brian Legare of Dennysville, Stephanie Little and husband Christopher of Machias, Kristen Hayden and husband Malachi of Bent Mountain, VA, and Thomas Champagne of Perry; seven grandchildren, Danielle Neddeau and husband Billy of Princeton, Makayla Sadler and companion Tyler Lewis of Bangor, Wyatt Depoy of Dennysville, Bruin and Hayven Little of Machias, Emileigh Champagne of Perry and Calais, and Malcolm Hayden of Bent Mountain, VA; mother-in-law Theresa Francis of Perry; two sisters, Diane Clark and husband Terrance, and Sandra St. Germain, of CT; a brother Kevin Champagne of CT; and many nieces and nephews. He was looking forward to the birth of his first great-grandchild due in February.

To order memorial trees or send flowers to the family in memory of Thomas Joseph Champagne, please visit our flower store.