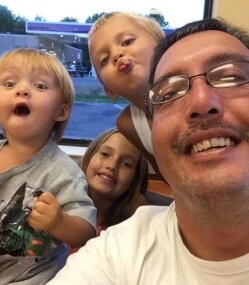 After graduating from Calais High School, Class of 1993, Stephen attended University of Maine at Orono. He worked for several years as a carpenter until returning to school at Washington County Community College where he earned two Associates Degrees, one in Business Management and the other in Office Information Systems, as well as a diploma in Computer Technology. Stephen became the Assistant at Washington County Community College for TRIO Student Support Services. He was a member of Phi Beta Kappa. Stephen loved the outdoors and enjoyed photography, hunting, fishing and working in the woods.

Above everything Stephen accomplished in life, he always said his greatest accomplishment were his children. He was always happy and had a positive outlook on life. Stephen was always ready to help anyone in need.

Stephen was predeceased by a son, Zakery Newell; his mother Linda Perry Newell; maternal grandmother, Mary Perry; paternal grandparents, Irene and Lewey Dana; and his Godmother Eleanor Mitchell. Surviving are his three children whom he loved dearly, Linda Newell, Stephen Newell III, and Nitap Newell; their mother and his dear friend, Keya Smiley; his father, Stephen Newell I and wife Audry, all of Indian Township; a brother, Jason Scott and wife Patricia of Waterville; his sister Alicia Wilhelm of Clearwater, FL; nieces and nephews, Keisha, Whitney, Kayla, Quoqsis, Lennox, Sakom and Petra; many aunts and uncles; and many special cousins, including Kathy, Betty, Myra and Dana.