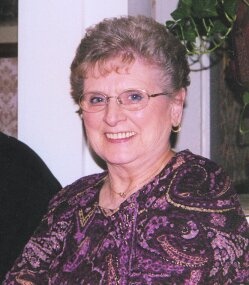 In addition to her parents, Shirley was predeceased by her beloved husband Clarence; a son John; three sisters, and brothers-in-law, Christine and Manzer Duplissea, Margaret and Ben Reilly and Doris and John McSorley; two nephews, Michael John McSorley and Douglas Duplissea and a son-in-law, Joseph McGovern.

She was a member and held positions of all offices of the William T. Wren Unit # 23 American Legion Auxiliary in Baileyville. Shirley enjoyed bowling and for years was a member of the Ladies Bowling League at the Spednic Club in Baileyville, and a regular with The Tuesday Night League and The Candy Town Senior Bowlers, both in St. Stephen. She also enjoyed playing Beano. Her happiest moments were spent with her beloved family at their camp at the Lamb Farm.

Shirley is survived by her two children, Cindy A. McGovern of Machias, and Michael E. Murphy and his wife Susan, of Baileyville; five granddaughters, Erica Pike and significant other Jason Croman of Alexander, Jessica Murphy and significant other Andrew McBrine of Hermon, Melissa Pike of Corrina, Katie Sawyer and husband Matthew of Carmel, and Alexandra LaChapelle of Machias; four great grandchildren, Connor and Ava Croman, Isabella Mathews and Alayna McBrine; and two special nephews, Herb Duplissea and his wife Lyn, and Gordon Reilly and wife Sandy.

A special thank you to her two caregivers, Brenda McPhail and Chrissy Parker, who went above and beyond in their care and comfort they provided to Shirley.

A graveside service, to be held at Woodland Cemetery in Baileyville will be announced in the coming weeks. Arrangements by Mays Funeral Home, Calais & Eastport.

To order memorial trees or send flowers to the family in memory of Shirley Murphy (Sproat), please visit our flower store.