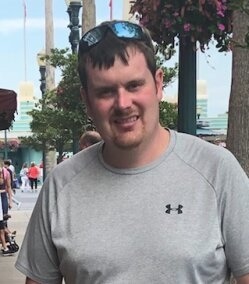 After graduating from Calais High School, Class of 2006, Shane furthered his education at Husson University, majoring in Business. While at Husson, he met his love, Caitlin Wright. On September 29, 2016, they were united in marriage. Shane worked various places until finding his dream job with Bangor Motorsports.

Shane was a member of Adventure Ride Maine and the snowmobile club in Hermon. He loved the outdoors, riding four-wheelers, snowmobiles, motorcycles and his bicycle. His most enjoyable times were those spent with his two daughters, taking them to all their activities. Shane found his true passion being a dedicated and loving husband, father and son.

Shane was predeceased by his Nan and Pa, Mary and Larry Gillespie; his Gamp Norman and Donna Brown, and an uncle, Donnie Burgess. Surviving are his wife and best friend, Caitlin Brown; his two daughters whom he loved to the moon and back, Hartley Anna and Peyton Mary; his parents, Dean and Michelle Brown of Alexander; brother Evan Brown of Alexander; mother-in-law and father-in-law, Joyce and Russell Wright of Lubec; sister-in-law, Krista Wright of Lubec; grandmother-in-law Carolyn Wright of Lubec; two nieces, Leah Marie and Jaelyn Anna; aunts and uncles, Mary-Jo and Jeff Smith, Wendy and Daniel Foster, Billy Gillespie, Randy and Becky Wright, Ricky and Tammy Wright, Roger Wright and Darlene Wright and companion Craig Fletcher; best friends, G and Jocelyn Lucero of Hermon; many cousins; his extended family and friends at Bangor Motorsports; his canine companion, Oakley; and two feline companions, Jackson and Liam.

Visiting hours will be held from 1 p.m. until 2 p.m. Sunday, November 10, 2019 at Mays Funeral Home, 26 Church St., Calais. Following visitation, a celebration of Shane’s life will be held at 2 p.m. with Anthony Giard, Celebrant. In lieu of flowers, donations may be made to https://www.gofundme.com/f/9dz6nq-shane-brown to help his wife and daughters.
To order memorial trees or send flowers to the family in memory of Shane Brown, please visit our flower store.