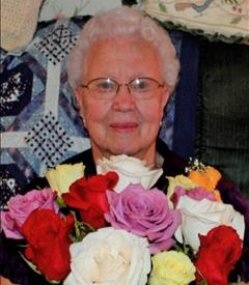 Charlotte – Ruth Eileen Sawyer, 100, entered the arms of Jesus on Monday, October 11, 2021 at Calais Community Hospital with her daughter and pastor by her side. Ruth was born in Charlotte on August 27, 1921, daughter of Oscar and Lizzie (James) Brown.

After graduating from Calais Academy, Class of 1937, Ruth started working in the local fish factories until marrying S. Kenneth Sawyer in 1940. When Kenneth left to serve in the Army during WWII, she started a career as a sales clerk that expanded over 30 years, initially for Bates Jewelry Store, and later for Rutherford’s Jewelry Store. Ruth and Ken spent many years together traveling throughout the state of Maine camping.

After retiring in 1983, Ruth devoted her time to her two grandchildren Ken and Krista, and two great-grandsons Connor and Colton. Living across from the school, she was able to spend every morning with them and often allowed them to eat ice cream for breakfast, and serving them an afternoon snack. Ruth also loved to attend all of their after-school activities, whether it was going to the dentist or attending their concerts and games.

Ruth was a founding member of the Charlotte Baptist Church where she served as a Deaconess and taught Sunday School. She was also a founding member of the Charlotte Vol. Fire Dept. Auxiliary. Ruth loved cooking, knitting, tending to her flower gardens, bird watching and was an avid reader. She will be fondly remembered for her pies and cinnamon rolls.

The family wishes to thank Dr. Cressey Brazier, Dr. Elizabeth Eliacin, and the nursing staff at Calais Community Hospital for going above and beyond in their care and comfort during Ruth’s final days. A special thanks goes to Sally Johnson for all her years of care.


Visiting hours will be held 6-8 p.m. Wednesday, October 13, 2021 at Mays Funeral Home, 26 Church St., Calais. A Celebration of Ruth’s Life will be held 1 p.m. Thursday, October 14 at the Charlotte Baptist Church, 1096 Ayers Junction Rd., Charlotte. Burial will follow in the Round Pond Cemetery. In lieu of flowers, donations in Ruth’s memory may be made to either the Charlotte Baptist Church, c/o Janet Moholland, 21 Annas Dr., Charlotte, ME 04666, or the Charlotte Vol. Fire Dept. Auxiliary, c/o Herbert Clark, 9 Annas Dr., Charlotte, ME 04666.

To order memorial trees or send flowers to the family in memory of Ruth Eileen Sawyer, please visit our flower store.