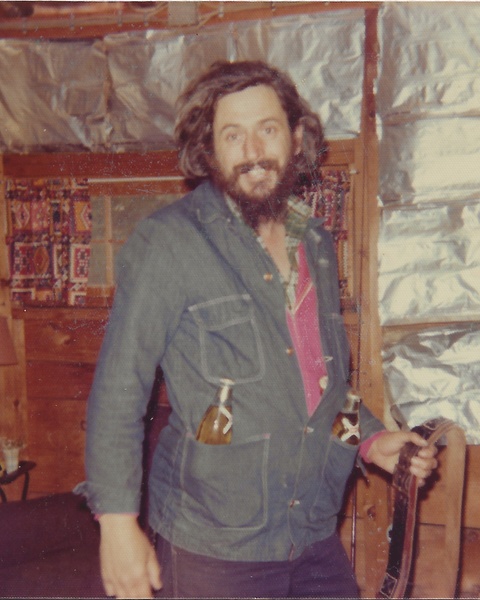 With a gust of fall air, I see the leaves released from their branches. They float and fall in the same moment. The sun shines, warming my home and feeding the life inside. The air is warm, defiantly so. I notice the gentle clashing of the leaves that remain, and something else, drops of rain. The sunlight has been scattered into rays by the clouds. With the windows open, the stagnant air from our days away has been replaced with clarity.

I think of my papa and I notice the fog. It is in my memories of him, and not in this world, just as he is, no longer here.

Similar, the way fog sits when it is present, enveloping, salty, and adumbral. Appearing unpredictably, and the same as it always has been. Moments between pass in perpetuity, and often in years. Returning unaltered, familiar, and stubborn; as if life has not passed at all. Holding absolute knowledge.

His knowledge did change though. He was always learning, immeasurably skeptical of our world and its beings. It was the delivery that never changed, firm and conclusive.

I could tell you of his life, but he wouldn’t wish for me to share it. How he grew up and where with his two siblings, Mary and John and his parents, Joyce and Colin. The education he received from his grandfather, Boob or his uncle, Clyde. Driving through the streets in reverse. His early enlistment in the army, serving with his best friend, Dave, and returning to the area to build his own family and stories from life with his two children; Diana and Troy. A return to the way he grew up in his early years. The talents he nurtured, cooking, writing, and hunting without light. The arrival of his grandchildren Cameron, Rachael, Wyatt, and Lance. The end of his first marriage, how he met his wife Lynn, how he moved to Canada and was removed years later. We all grew up, in some ways more than others.

I sought him out before I moved away from all I had known. He worried for my safety, and worried for my compassion and empathy, “this role you have chosen, it will make you jaded”.

The sun shines onto me through my window and I know it is all too much.

“You need to know where the line is, but don’t follow it.”

He only lived life on his terms, you were lucky to know him, luckier to love him. - Rachael Mahar

Ronald “Butch” Gary Morrison, 78, passed away peacefully with his family by his side on October 6, 2022. He was predeceased by both parents, Colin Whitney Morrison and Helena Joyce (McNutt) Morrison, and his youngest sibling, John Morrison. He leaves behind his wife of 20 years, Lynn Sprague, Sister Mary Parks and her husband Albert Parks of Calais, Maine, daughter Diana Gale Mahar and her husband Artie Mahar of Pembroke, Maine, son Troy Colin Morrison and his wife Shannon Morrison of Perry, Maine. His four beautiful grandchildren; Cameron Whitney Morrison and his wife, Mianna of New Philadelphia, Ohio, Rachael Nicole Mahar and her partner Brett Lewey of Orono, Maine, Wyatt Vincent Mahar and his wife Nicole of Calais, Maine, and Lance Evan Morrison and his wife, Amanda of Valdosta, Georgia. He also leaves behind three great grandchildren; Abigail Morrison, Sophia Morrison, and Lincoln Mahar. His only nephew John Thomas Clark, wife Helen, and children Amber, Mika, and Garrett. We cannot forget his beloved cats Fred, Enough, and Sammie. He will be forever remembered by those who loved him.

The family will hold a private burial to honor his wishes. Arrangements by Mays Funeral Home Calais & Eastport.

To order memorial trees or send flowers to the family in memory of Ronald G. Morrison, please visit our flower store.