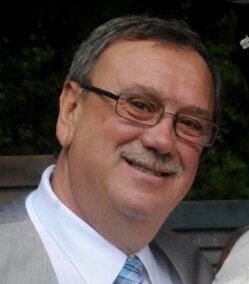 Fayette – Ronald G. Giard, 71, passed away peacefully at his home on Wednesday, February 3, 2021 with his loving wife by his side. Ron was born in Lewiston on February 11, 1949, son of Gerard and Jeannette (Cote) Giard.

After graduating school in Auburn, Ron worked in the shoe industry for many years before joining Geiger. His career at Geiger spanned over 30 years, retiring as Executive Vice President. Ron enjoyed fishing, boating, woodworking, playing guitar, and any activity that involved being with his children and grandchildren. After retirement, Ron could be found doing the two things he loved the most, fishing with his brother Dan (and friends), and spending precious moments with his beloved grandchildren. He was Past President and a Director of the Echo Lake Association and was a Steward of the Kennebec Land Trust Properties.

In addition to his parents Gerard and Jeannette Giard, Ron was predeceased by his sister Patricia Richardson; and a sister-in-law Monique Giard. Surviving are his beloved wife Ann; son John Giard and wife Tricia of Chapin, SC, son Anthony Giard and husband Brian of Calais, ME, and daughter Jennifer Giard Arsenault and husband Aaron of West Simsbury, CT; Tamara Gleeson and husband Scott of Freeport, ME; five grandchildren who he loved dearly, Maxwell, Morgan, Conor, Chase and Will; two brothers, Dan Giard of Minot, ME and Fern Giard of Harpswell, ME; brothers-in-law Tom Richardson of Greene, ME, Bill Batchelder of Winthrop, ME and William Cloutier and wife Patricia of Manchester, NH; sister-in-law Bon Michaud and husband David of Winthrop, ME; and many nieces, nephews and friends.

A private graveside service will be held in May at Readfield Corner Cemetery. In lieu of flowers, donations in Ron’s memory may be made to the Echo Lake Association, PO Box 322, Kents Hill, ME 04349.

To order memorial trees or send flowers to the family in memory of Ronald G. Giard, please visit our flower store.