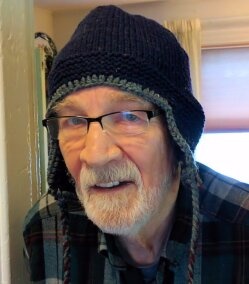 Eastport, Maine - Robert “Bob” St. Clair died in his home at the age of 88 on August 18th, 2021. He was born on June 25th in 1933. After growing up in Alexandria, VA Bob attended George Washington University and then Purdue University. While at George Washington, he met his wife, Collin, asking her out for a beer for their first date.

He was a chemist and started his professional career in research at Rohm & Haas Company, and later various other companies where he was involved in marketing and sales. Bob and Collin moved to Golden, CO where Bob founded a company called Mountain Chemicals and they raised their two daughters. After retirement, he did volunteer work in prisons and jails, assisted Collin with her interior decorating business, and worked with homeless ministries in Colorado. In 2012, he and Collin moved to Eastport, Maine to be closer to their youngest daughter and her family. His passion for volunteerism continued until his final day, where he was still active in his local church and community.

He was predeceased by his parents, Howard and Helen (Anderson) St. Clair, and brothers, Thomas and John “Jack” St. Clair.

He is survived by his wife, Collin (Rathbone) St. Clair; his two daughters, Adrienne St. Clair of Denver, CO and Alice Schuth and her husband Brian of Eastport; his sister-in-law Helen (Anderson); his three grandsons: Sam and his wife Natalie (Whitcomb) of Biddeford, Henry and his partner Sarah of Somerville, and Frank of Somerville. All three originally born and raised in Eastport. He was fortuitously able to meet his great-granddaughter Molly in July of 2021. Also surviving are his nieces, Betty Curtiss and husband Bill, Karen Boess and husband Murray, Lori Shore and husband Steve, Barbara Causseaux, and Debbie Ogden and husband Wayne; and several grandnieces and grandnephews.

A memorial service will be held at the Christ Church in Eastport on September 18th at 11 AM. Donations in Bob’s memory may be made to the Peavey Memorial Library, 26 Water St., Eastport, ME 04631. Service by Mays Funeral Home, Calais & Eastport.

To order memorial trees or send flowers to the family in memory of Robert G. St. Clair, please visit our flower store.