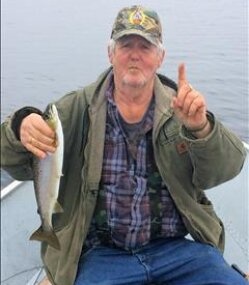 Baileyville & Grand Lake Stream – Robert Walter Miller, 80, passed away peacefully on Friday, June 18, 2021 at his home surrounded by his family. Robert was born in Calais on January 29, 1941, son of Walter and Sadie (Farris) Miller.

Robert graduated from Woodland High School, Class of 1959. While in high school, he started working part time at the local paper mill. After graduating, Robert started his career with St. Croix Paper, retiring from Domtar as Superintendent of #4 Paper Machine with over 46 years of service. On June 22, 1963, he married the love of his life, Judith Rayner. Together they owned and operated Chet’s Camps on Big Lake from 1976 until 2002.

Robert was an avid outdoorsman. He was a Registered Maine Guide and enjoyed hunting, fishing and riding on the side-by-side with his wife Judith. Family meant the world to Robert and he loved every moment he was able to spend with his children and grandchildren.

The family wishes to thank their dear friends Charlie and Pam Towns, and home health / hospice nurses Brittany Seavey and Melanie Howard, for all going above and beyond in their care to Robert and support to his family.

To order memorial trees or send flowers to the family in memory of Robert Walter Miller, please visit our flower store.