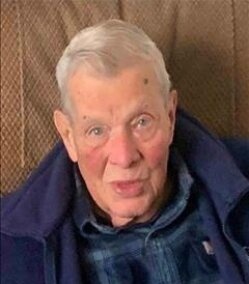 Mike graduated from St. Stephen High School, Class of 1950 and started working in the woods for Eastern Pulp Wood Co. He then started at St. Croix Paper Co. in the finishing room, working up to operating the machines, a career that extended for 40 years, retiring from Georgia Pacific in 1994. A month after retiring, Mike started working at a local funeral home and in 1997 assisted in opening the Baileyville Recycling Station, where he worked for 13 years until 2010.

On the 4th of July he met his future wife, Marilyn Call. They were united in marriage on September 16, 1955. Mike loved to sing and was a member of the Barbershop Quartet for several years. He was an avid outdoorsman, making numerous trips to the Allagash Wilderness, spending time at hunting camp in Tomah, fishing on West Grand Lake and bird hunting with his grandsons. Mike was thrilled to have been able to present each of his great grandsons with their lifetime hunting and fishing license. Mike was very knowledgeable about WWII facts and history. He was a member of the Quarter Century Club, Spednic Club, NRA and the Sportsman Alliance of Maine. Mike was a longtime and faithful member of the People’s United Methodist Church in Baileyville where he served as a church trustee and choir member.

Mike will be lovingly remembered by Marilyn, his wife of 66 years; his sister Mary Anne Russell of St. John, N B; his daughters, Deborah Johnson and husband David of Robbinston; Teri Trafton of Gorham; four grandchildren, Adam Johnson of Lyman, Matthew Johnson and wife Lauren of Rangeley, Megan Strout of Yarmouth, and Tyler Strout of Gorham; three special great-grandson, Brayden, Owen and Tanner whose antics brought him much joy; and his favorite feline friend, Harley.

The family wishes to thank Dr. Peter Wilkinson, and the staff at Washington Place and Calais Community Hospital, for their continued care and kindness extended to Mike.

A graveside service will be held in the spring at the Woodland Cemetery. In lieu of flowers, donations in Mike’s memory may be made to People’s United Methodist Church, Third Ave. and Summit St., Baileyville, ME 04694. Arrangements by Mays Funeral Home, Calais & Eastport.

To order memorial trees or send flowers to the family in memory of Raymond "Mike" Trafton, please visit our flower store.