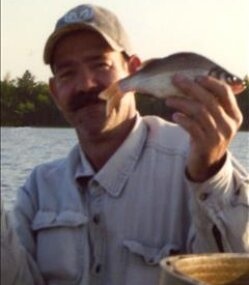 Princeton – Randy Jones, 50, passed away after a short illness at Calais Community Hospital on April 5, 2022. Randy was born on February 15, 1972, son of Gordon and Janice Jones of Princeton.

Randy graduated from Woodland High School and spent most of his life with his father. They were noted for riding around the Pokey Road every day. It was said that they could tell you the names of every deer on that road. They loved to hunt and fish together. Randy and his father would take Sharon and Gilley along to make fun of. Randy was always helping out his old friend Allen with his firewood or yardwork. He was an avid outdoorsman who loved to hunt and fish with his best friend Jim Lucas. Randy and Jim loved four-wheeling, going to the dump on Sundays or just riding on the dirt road. Anyone who knew Randy knew he was a friend you could count on to give a helping hand.

In addition to his parents, he was predeceased by his grandparents, Fred and Martha Jones; uncles Gerard Jones of Princeton, Bernard Jones of Alaska and Martin Brown of Plantation 21; a sister Sandra Jones; and cousins Jeff Jones, Sharon Martell, Janice Hold and Melissa Corbett. He is survived by his brother Danny Jones and wife Laurie of Princeton; his sister Pam Cassidy of Millinocket; a special niece Martha Jones; an aunt Anita Jones of Alaska; an uncle Dale Jones and wife Bernita of Princeton; his best buddy Jim Lucas of Princeton; many cousins, nieces and nephews from Maine to Alaska; as well as too many friends to mention.

A memorial service will be held at a later date. Arrangements by Mays Funeral Home, Calais & Eastport.
To order memorial trees or send flowers to the family in memory of Randy Lee Jones, please visit our flower store.