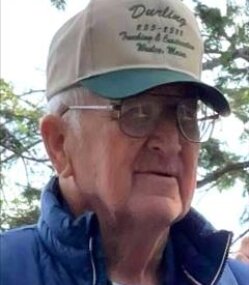 Philip attended the one room grade school in Wesley and he graduated from Machias Memorial High School in 1954. He enlisted in the U.S. Army and served in Germany. In June of 1958, he married Judy Harmon. After he received his honorable discharge, he returned home to work and ultimately to raise his family. He followed in his father’s footsteps and then led a son down the same path; trucking, plowing snow, road construction, carpentry, and mechanics. He built, owned and operated the P&J Grocery & Service Station in Wesley and was active in town affairs. Philip was a hard worker, but he always found time to help others. He also was always ready for a good time.

No services will be held at this time. Arrangements by Mays Funeral Home, Calais & Eastport.
To order memorial trees or send flowers to the family in memory of Philip Walter Durling Jr., please visit our flower store.