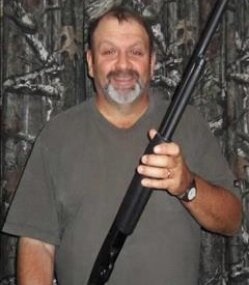 Princeton – Peter F. Leighton, beloved husband and father, passed away unexpectedly on Saturday, March 12, 2022. Peter was born on April 26, 1962, to Carl “Bud” and Joyce Leighton. Peter excelled at sports and loved to hunt and fish, spending many hours on Big Lake at the family camp doing that.

Peter married his high school sweetheart, Darlene Bailey Leighton, in August, 1984. The births of his two children, son Benjamin and daughter Kathleen, were the highlights of his life. He loved them both and spent many hours taking them hunting and fishing. No one could have been more excited than he when they each shot their first partridge.

Peter’s proudest moments were when Ben and Monica, gave him two beautiful granddaughters, Addisyn and Norah; and when Katie and Kirk gave him his grandson Maddox. No bigger grins have ever been seen. He was also extremely proud of Kobe Meader, Kiarrah Libbey, and Peyton and Ashlyn Burke, whom he considered his grandchildren also.

Peter worked many years in the Woodland mills where he made many lifelong friends. He was very proud of his work as a millwright and always anxious to help others there.

He is survived by his wife Darlene; his son and daughter-in-law Ben and Monica Leighton; his daughter Kathleen Leighton and son-in-law Kirk Meader; beloved sister Kimberly Nott and husband Joe; his grandchildren, Addisyn, Norah and Maddox; sisters-in-law, Linda Phelps and husband Glen, Lori Pike and husband Tony, and Trina Brown and husband Lowell; many nieces and nephews who were all special to him; and special aunt Annie McCall and uncle Rodney Leighton.

A Celebration of Peter’s Life will be held 6 p.m. Tuesday, April 12, 2022, at the Princeton Elementary School. A private burial will take place in the South Princeton Cemetery. In honor of Peter, in lieu of flowers, please donate to a children’s charity of your choice. Arrangements by Mays Funeral Home, Calais & Eastport.

Always follow Peter’s advice and keep your stick on the ice!


To order memorial trees or send flowers to the family in memory of Peter Fleming Leighton, please visit our flower store.