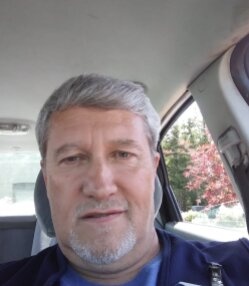 Robbinston – Perry Shain came into the world at the Calais Regional Hospital, born to Marion (Griffin) and Harry Shain on February 8, 1965. He grew up in Perry, Maine with his two brothers and two sisters. Perry graduated from Shead High School in 1983 and joined the Navy in 1984. The Navy gave him a chance to see the world. He was stationed in Guam, but traveled to many countries. This fed his adventurous spirit.

After the death of his father Harry, he relocated back to Maine to be closer to his roots. Perry had many jobs, but worked for twenty years at Walmart both in South Carolina and Maine. He has been a service tech in the automotive department and has made MANY friends in the company.

Perry was a friendly, kind-hearted man. He loved to tease, tell jokes, dance and have a good time. Loving the outdoors, he often went 4-wheeling, camping, swimming and spending time with his family and friends. He was a giving person and would go the extra mile for the people he cared about.

To order memorial trees or send flowers to the family in memory of Perry Allen Shain, please visit our flower store.