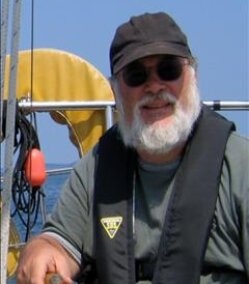 Paul is survived by his wife, Janet; sons, Heron and Damon; grandson, Kieran; and daughters-in-law, Lindy and Molly. He was predeceased by his parents, Ross and Marion; brothers, Peter and Fred; and grandson, Evan.

Paul was born in Brooklyn, New York, and grew up in Arlington, Virginia, the oldest of three brothers. He attended Antioch College, which is where he and Janet met. During his time as a student there, he completed internships with a nickel mine in Ontario, Canada, a mental health facility in California, and a civil rights organization in Washington, D.C., experiences that shaped his perspective in meaningful ways and which he spoke of often. After college, Paul and Janet married, and he became a minister for the Ethical Culture Society, leading groups in Baltimore, Maryland, and Teaneck, New Jersey.

In 1971, Paul and Janet bought land in Trescott Township and built a camp on Whiting Bay, commuting up from New Jersey on the weekends and during the summer. As a child, Paul spent summers on Ripley’s Neck in Harrington, Maine, and he was eager to build a life by the water. Paul and Janet moved to Trescott full-time in 1974, started a family, and have made their home there ever since. For many years, Paul was the owner and operator of Motorsmiths auto repair shop in Dennysville. He later worked as a health education coordinator.

Paul loved cars, sailing, live music, and sharing meals with friends and family. He will be remembered for his warmth, humor, and neighborliness. Whether volunteering on local boards, officiating weddings and memorial services, or pulling cars out of ditches, he made an effort to connect, problem-solve, and tell jokes. He loved talking with people, hearing their stories, and sharing his observations.

The family extends profound thanks to everyone who has reached out to support them throughout Paul’s illness, with special thanks to Kevin Boston for his daily assistance.

A memorial service for Paul will be held in the spring. In lieu of flowers, donations may be made in Paul’s name to the WCCC Tool Scholarship Fund c/o of the WCCC Business Office, Washington County Community College, One College Drive, Calais, ME, 04619. Funds will be used to help cover tool costs for students in the automotive technology program. Arrangements by Mays Funeral Home, Calais & Eastport.
To order memorial trees or send flowers to the family in memory of Paul Dwight Weston, please visit our flower store.