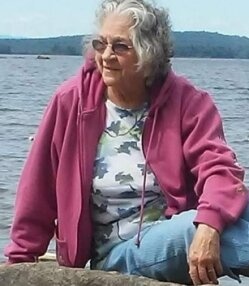 Calais & Alexander – Patricia Ann Pease, 82, passed away at home on August 9, 2021. Patricia was born in Oakfield on October 3,1938 to Ralph and Rose (Grondin) Richards. Growing up, her family resided in Connecticut, but soon after marrying Richard Pease, they relocated to Alexander where they started a family.

Patricia was a wonderful mother, kind and generous. The title “Mom” extended to many more than just her own children. Pat loved to read, do crossword puzzles and always had a cat around. In 1999, widowed Patricia met Russell Buker, with whom she shared many wonderful years.

She is survived by her significant other, Russell Buker; three children, Beverly Reardon and her husband, Mark of Calais, Karen Poor and her partner, Brian McCray and Kathy Jordan, all of Alexander; two step children, Vincent Barry Buker and his wife Tracy of GA and Dawn Rose Buker and her husband Dave of NH; eight grandchildren, April Knowles of Baileyville, Troy Perkins and his companion Connie Farrell of Calais, Dawn Blake and her husband Errol of Lewiston, Shantelle Buchanan and her companion Terence Rucker of NH, Amber Jordan and her husband, Travis Chisholm of St. Stephen, Katherine Jordan and her companion, Colby Hatt of New Brunswick, Dylan Thompson and Alyssa Stevens, both of Princeton; great grandchildren, Seth, Luke, Avery, Shabba, Maxx, Ben, Adrian, Devon, Kariana, Brianna, Bryson, Charles and Samuel; two brothers, Laurice Richards and Kenneth Richards and his wife Amy, all of CT; a son-in-law, Dennis Perkins of Calais and many nieces, nephews, cousins and countless friends.

A graveside service will be held 11:00 am, Saturday, August 14th at Alexander Cemetery with a reception to follow. Arrangements by Mays Funeral Home, Calais & Eastport.

To order memorial trees or send flowers to the family in memory of Patricia A. Pease, please visit our flower store.