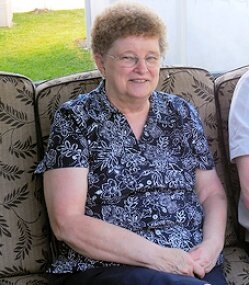 Calais – Patricia Mabel McCoubrey, 75, was surrounded by family when she passed away on October 22, 2020 at Woodland Senior Living of Brewer. Patricia was born on April 9, 1945 in Brockton, Massachusetts to Carl and Elizabeth (Lyons) Smith. She was a graduate of Calais Memorial High School, Class of ’63 and soon after married George McCoubrey on September 4, 1966.

Together, she and George raised their three children in Calais. She took some time off from work when her children were small, but kept busy as a telephone operator, a bank teller at the First and she later worked as a cashier at both Johnson’s Hardware and then the IGA. Pat spent much of her childhood in Eastport which always held a special place in her heart, visiting as often as she could. She also moved to Virginia for a short time but always knew Calais was home. Pat loved to read and challenge herself with crossword puzzles. She was a dedicated mother and grandmother, Patricia lived for her family, especially her grandchildren.

She was predeceased by her husband George in 2018 after 51 years of marriage as well as her parents and sister, Shirley Jack.

Patricia is survived by her three children, Sherri Reynolds and her husband Robert of Calais, William McCoubrey and his wife Karen of New Hartford, CT and Carl McCoubrey of Calais; four grandchildren, Ashley Reynolds of Brewer, Emily Reynolds of Westbrook, and Liam and Kian McCoubrey, both of New Hartford, CT; her sister, Rebecca Stanhope of Zephyrhills, FL; sisters-in-law, Susan Dooley and her husband Richard of Baileyville, Linda McCoubrey and Kumcha McCoubrey, both of Calais; brother-in-law, Thomas Jack of NC and many nieces, nephews and friends.

A graveside service will be held 1:00 pm, Saturday, November 7th at Calais Cemetery. Anyone who plans to attend is asked to please wear a mask and follow the CDC recommendations concerning Covid-19 prevention. Donations in Pat’s memory can be made to Alzheimer’s Associations Maine Chapter at https://www.alz.org/maine. Arrangements by Mays Funeral Home, Calais & Eastport.

To order memorial trees or send flowers to the family in memory of Patricia M. McCoubrey, please visit our flower store.