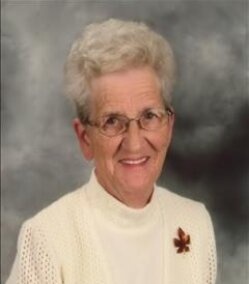 Baileyville – Patricia “Patsy” Hanson, 83, passed away surrounded by her family on Saturday, December 4, 2021 at Maine Medical Center in Portland. Patsy was born in St. Stephen, NB on April 7, 1938, daughter of Ernest and Helen (Hall) White.

Patsy was raised in Baileyville and graduated from Woodland High School, Class of 1956. On July 15, 1957, she married her love, Alvin “Alvie” Hanson. Since Alvie was in the Navy, they moved to where he was stationed in Key West, FL where they met many friends. Following his service, they returned to Baileyville, started their family, and purchased their first home on Summit Street where they still reside today.

Patsy worked for the Woodland High School from 1974 until 2015 as a Study Hall Monitor. She played the graduation march Pomp & Circumstance for over 30 years. Patsy loved seeing the local children during their graduation ceremony. Following her retirement, she was still active helping with the Woodland High School graduation. Patsy was a Communicant and Organist for St. James the Greater Church in Baileyville where she played for numerous funerals and weddings. Patsy and Alvie loved to dance and when they were younger, loved to ice skate, tend her flower gardens, play music, and truly enjoyed every minute spent with her family.

In addition to her parents, Patsy was predeceased by her brother Bill White, sisters-in-law, Gladys McCray and Marilyn Hanson and brothers-in-law, Kenny and Edward Hanson. Surviving are her beloved husband of 64 years and best friend Alvie Hanson; three children, Alvin “Butch” Hanson of Baileyville and his children Joseph J. Hanson and his wife Lindsey Royer and Darci Jo Petrov and her husband Kruno, Nanette Chippeaux and husband Don of Wichita, KS and their son Christopher Chippeaux and his fiancée Kristy Shely, and Joseph Troy Hanson and his wife Angela of Alexander and their children, Nicole Hanson, and Joshua Hanson; six great grandchildren, Braydon, Jonathon, Emerson, Nikola, baby Alvie and baby girl Evelyn Grace; sister, Joan Greenlaw of Calais; sisters-in-law, Nita White and Mildred Hanson; and many friends and extended family.

A Mass of Christian Burial for both Alvie and Patsy will be celebrated 10 a.m. Saturday, May 21, 2022 by Father Brad Morin at St. James the Greater Church, 60 Summit St., Baileyville. Burial will follow in the Woodland Cemetery. Donations in Patsy’s memory may be made to a charity of one’s choice. Arrangements by Mays Funeral Home, Calais & Eastport.

To order memorial trees or send flowers to the family in memory of Patricia Marie Hanson, please visit our flower store.