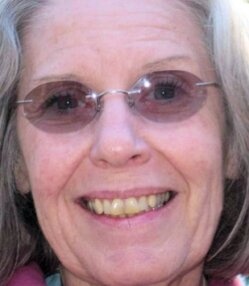 Baileyville - Patricia Ann (Campbell) Gagner, 75, passed away on November 29th, 2020 at Winterberry Heights Assisted Living/Memory Care in Bangor, Maine, her home since 2016, after a long war with Alzheimer’s Disease and short battle with Covid-19.

Pat was born on March 14, 1945, in St. Stephen, New Brunswick, Canada, to Dorothy (Bartlett) and Shirley Campbell, Sr. She graduated from Calais Memorial High School in 1963.

She was a devout Christian and had an abiding faith and belief in her Lord. She lived her life in a way to exemplify her Christian values. She was a very active member of the Second Baptist Church in Calais until she moved to Bangor. All throughout her life, she took great joy in helping others. She volunteered for many years at Ronald McDonald House in Bangor, a charity which was close to her heart after her mother’s passing.

She was a hard worker with a strong work ethic. In addition to raising her children, she held several jobs (sometimes a few at one time). Over the years, she worked for the telephone company in Calais, Doctor William Gould, DDS, The Maine Publicity Bureau, and The International Motel. She was a dedicated employee of the Calais School Department for over 30 years. She began her career at Calais Elementary School in 1978, first as a teacher’s aide and, in 1985, transitioned into her position as the secretary, which she held until she retired in 2011. She was also the secretary for Calais Adult Education for several years. Her love of children, support of education, exceptional ability to multi-task, and her amazing memory for numbers served her well in her school secretarial career.

Before her illness, she was an avid reader and liked to play cards, Scrabble, and cribbage. She was a huge fan of Wheel of Fortune and played along with the TV every evening, often solving the puzzles before any letters were revealed. She loved to take pictures and was her family’s designated photographer, sometimes to their great chagrin. She never missed sending friends, family, and acquaintances a greeting card for their birthday and Christmas and would spend hours writing notes and letters. She did not love cooking, but spent weeks making fudge to gift her friends and family every Christmas. Because she was always cold, she took every opportunity available to travel to warmer climates. She and Jeff especially looked forward to their trips to Florida. They spent summers camping at Elsemore’s Landing for many years, where they had a wonderful group of friends. They enjoyed getting together regularly with “The Woodland Gang” for Friday night dinners. They shared a love of music. She delighted in dancing, so much so that their wedding vows included a promise from Jeff to “dance with her until his knees gave out”. They rarely missed a grandchild’s sporting, music, or academic event. They also reveled in attending high school basketball games together in both Calais and Woodland and spent many a February vacation in Bangor at Tournaments, although they sometimes cheered for opposing teams.

Pat was predeceased by her parents; her brother, Shirley (Bub) Campbell, Jr.; her sister-in-law, Beryl Ann Campbell; her grandson, Addison Coty; and her beloved husband of twenty-one years, Jeffrey Gagner. She is survived by her children: Lawrence Saunders, Jennifer James and husband Tim, Kim Emerson and partner Brandon, John Gagner and wife Candy, Jacob Gagner and wife Sarah; She also leaves behind nine grandchildren of whom she was very proud: Seth Saunders, Kassidy Moore and husband Garett, Casey Donovan and partner Mariah, Kylie Donovan, Kobe Saunders, Antonia Gagner, Paige Gagner, Morgan Gagner, John Gagner, Jr. She will also be missed by her loving sisters: Carole Thornton and husband Gary, Bonnie Johnson and partner David, Joanne Pottle and partner Bob, Judy McGinley and husband Stephen. She had many nieces and nephews (who called her “Auntie”) as well as numerous great nieces, great nephews, aunts, uncles, and cousins; She is also fondly remembered by her ex-husband, Richard Saunders and his family and her countless friends, including her “bestest” friend, Pearl Tomah.

Due to Covid restrictions there will be no service at this time. In lieu of flowers, those who wish, may make a donation in her name to a charity of their choice or any of the following: The Ronald McDonald House of Maine, The Alzheimer’s Association, The Addison Coty Memorial Scholarship. Arrangements by Mays Funeral Home, Calais & Eastport.

To order memorial trees or send flowers to the family in memory of Patricia Ann Gagner (Campbell), please visit our flower store.