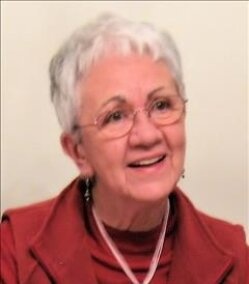 As a teenager, Olive worked for Novilla’s Dance Hall while attending Calais Memorial High School where she graduated with the Class of 1952. After graduating, she worked at both W.T. Grant’s and Dinsmore Dental Office until marrying Thomas (Bill) W. Bentum, III on August 28, 1956, in Calais. Bill’s service with the Canadian Army took them briefly to Ontario, a couple years in Germany with NATO, and his remaining eight years in New Brunswick. After Bill’s retirement in 1967, they returned to Calais and Olive took a job as bookkeeper for Taylor’s Furniture, where she dedicated 34 years. Olive was a member of the Calais United Methodist Church and a member of the United Methodist Women. She loved to garden and read and will be remembered for her kind, compassionate nature and her love for her family.

In addition to her parents, Olive was predeceased by her husband, Bill, her brother, Norman Carlow, Jr., her sister, Donna (Carlow) Bradstreet, and her brother-in-law John Bradstreet.

Olive is a descendant of German ancestors John Jacob and Elzabeth Carlow who settled Pownalborough in 1752, of Revolutionary War ancestors John and Jemima Noble of Delaware who settled in Calais in about 1780, and of Richard Warren of the Mayflower.


To order memorial trees or send flowers to the family in memory of Olive Alice Bentum, please visit our flower store.