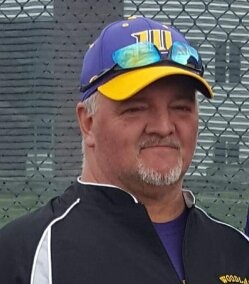 Baileyville - Michael T. Hayward, 55, of Baileyville, passed away surrounded by his family on Friday, November 20th, 2020, due to complications arising from COVID-19.

Born on September 30, 1965 to Janice and Leo Hayward, Mike would be the eldest of three sons. At an early age, Mike developed what soon proved to be a lifelong passion for sports. He graduated from Woodland High School in 1983, where he excelled at many sports and was often noticed for being an exceptional athlete. After high school, Mike worked various jobs, such as the Department of Transportation, Georgia Pacific, WHCA, and at the Frank Beckett Center. When Mike was not working, he could often be found playing softball with the guys. Whether he was cooking up a big holiday breakfast, assistant coaching a local sports team, or delivering the morning newspaper, Mike was always doing for others. He genuinely enjoyed every moment spent with his family and was at his peak happiness when they were all under the same roof. As his oldest daughter, Taylor, was growing up, she was never found too far from her father. From fixing an old four-wheeler in the yard, to ice fishing, or cheering him on at his softball games, Taylor was always by his side. Mike was always open to, and extremely supportive of any of his younger daughter Haley’s endeavors. Hauling hay, or toting buckets of water for her horses, her smile always made his heart happy. Whether he was a referee, or a participant, living room games of HORSE with son Drew were often a highlight of his. His natural ability and passion for athletics were undoubtedly passed down to Drew, and Mike was extremely proud of all of Drew’s accomplishments. Mike also looked forward to weekend sleepovers, and Saturday morning trips to the dump with his grandchildren to visit Uncle Danny.

A small graveside service will be held for close friends and family at Princeton Cemetery, but in the spring a celebration of life will be held for all who wish to attend. We encourage those who wish to pay their respects, do so at their own convenience, in order to remain safe and healthy. Arrangements by Mays Funeral Home, Calais & Eastport.
To order memorial trees or send flowers to the family in memory of Michael Troy Hayward, please visit our flower store.