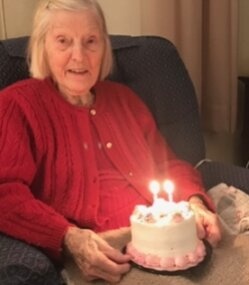 Alice graduated from Shead Memorial High School in 1938 and worked in New York City until the early days of World War II when she moved to Washington, DC, to work for the Department of the Navy. In 1948 when Military Sea Transportation Service was formed by the Secretary of Defense Alice was assigned to schedule tankers to supply fuel and supplies to bases all over the world. In 1978 Alice retired and moved to Portland to be near her sister and moved to Calais in 2018. Due to failing health she moved to Eastport Memorial Nursing Home a few months ago.

In addition to her parents Alice is predeceased by her sister Carolyn Shannon, brothers Milton Pottle and Merle MacNichol, nephew Ronnie Shannon and niece Heather MacNichol.

She is survived by her many nieces and nephews, Dougie and Anita Pottle of Perry, Gloria and Lee Harris of Perry, Judy Shannon of Portland, Jesse and Jill Shannon of South Portland, Lorraine and John Mitchell of Calais and Stanley and Holly MacNichol of Perry; several very special great nieces and nephews, and friends Marilyn Sells of Portland and Ann Foley-Schools of Gorham.

Alice’s family would like to thank the administration and staff at EMNH for taking such wonderful care of her.