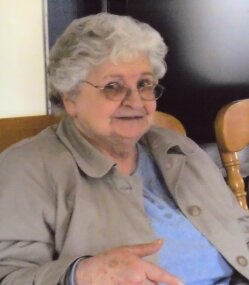 Calais – Marion G. (Lee) McLean, 85, passed quietly from her earthly home on Friday, October 4, 2019, the 67th anniversary of her wedding to her beloved Robert. She was born in Calais where she lived most of her life. Marion was the daughter of the late William Lee and Jane Vickers.

Besides her parents, she was predeceased by her husband Robert, her one and only love, who died in 1987. She also lost her brother Carlton, and her brother Herbert “Herbie” and his wife Wanda Lee.

She will be fondly remembered by her son Jeffrey and daughter-in-law Leah; her granddaughter Meredith Robitaille and her husband Jeremy; two grandsons Seth McLean and his wife Kristy Wagner, and Russell McLean; three great-grandchildren, Quinn Robitaille, Ronan McLean and Alex Robitaille; two nephews, William “Bill” and Jeannie Lee, and Troy Lee and their families; cousins Freda and Norm Provost and Dorothy and Bob Amadei; and many nieces and nephews from the McLean side of the family.

At her request there will be no visitation. A graveside service with Father Kevin J. Martin officiating will be held 1 p.m. Wednesday, October 9, 2019 at Calais Cemetery. Arrangements by Mays Funeral Home, Calais.

To order memorial trees or send flowers to the family in memory of Marion McLean (Lee), please visit our flower store.