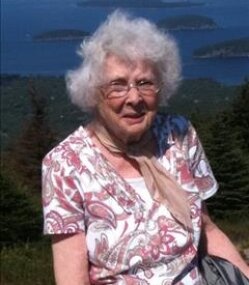 Calais and Biddeford, Maine - Margaret Elizabeth McVicar McKay aka as Peggy died on May 7, 2020 of natural causes during a seven day stay at St. Andre Nursing Home for rehabilitation. Prior to that she was living with her daughter, Ernestine McKay Letarte and her son-in-law Roger Letarte in Biddeford, Maine.

Margaret was born on June 4, 1928 in Oak Bay, New Brunswick, Canada to Bessie McVicar Leavitt. Margaret was the oldest of eight children.

Margaret grew up on a farm with her siblings. She attended a one room school house. Kindergarten through eighth grade. She later took a GED course and graduated from Calais Memorial High School.

Through the years Margaret held various jobs. Her very first job when she was living in Canada was at Ganong’s Candy Factory in St. Stephen. When Margaret moved to Calais, Maine she worked at the ware Knitters and the Hathaway Shirt Factory. She later took a nursing course at the Calais Memorial Hospital. Her last job before she retired was at Barnard's Nursing Home in Calais, Maine.

Shortly after Margaret retired she bought a camp at Cathance Lake in Cooper, Maine. She and her husband, Ernest had a wonderful time entertaining family and friends there.

Margaret is survived by her daughter Ernestine McKay Letarte and her husband Roger Letarte of Biddeford, Maine. Her son Philip McKay of Freeport, Maine. Three sisters, Bertha Bernier and her husband Ivan, Helena Kent and her husband Dough and Florena Stewart all of New Brunswick, Canada as well as many nieces, nephews and step grandchildren.

There will be no visiting hours. The funeral will be held on December 6, 2021 at 10:00 am at the United Methodist Church, 489 Main Street, Calais, Maine 04619. Interment will be at the Calais Cemetery. In lieu of flowers Please make a donation to the United Methodist Church. Refreshments will be served. Arrangements by Mays Funeral Home, Calais & Eastport. Condolences and memories may be shared at www.MaysFuneralHome.com

To order memorial trees or send flowers to the family in memory of Margaret Elizabeth McKay, please visit our flower store.