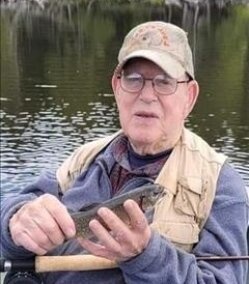 MAJOR MALCOLM “MAC” F. DOWNING, (US Army-Ret.) May 5, 1938 to February 24th, 2022, age 83, Lunenburg, VT took his heavenly departure surrounded by the love of his family. Having fought a valiant battle with numerous health issues, Mac realized his mission on this earth had ended and he allowed himself to rise on his own ray of light to meet his savior.

Born to Frank H Downing and Jean (Wilson) Downing, in Lancaster, NH, Mac spent his youth with his Father, Grandfather John, and favorite Uncle Paul learning the vigor of hard physical labor whether it throwing hay bales, logging, splitting and stacking firewood, or anything else physical in nature. These early on endeavors ingrained in him the value of a hard day’s work and he found himself putting those to the test throughout his entire life. Mac also developed a sincere passion for hunting and fishing that would be a driving force in his life as he used both to re-focus himself and find that inner peace those who share that passion understand. Brook trout and venison helped sustain his family on many occasions during lean times, but also were his favorite choice of protein for many years, and remarked no matter how hard it was to obtain it was worth its weight in gold. Also an avid bird hunter, he loved hunting Partridge for years, Mac was often seen with his bird dogs, Lady Dog and in later years Dixie Girl, in his Chevy or GMC pickups driving in and around Lunenburg.

Education and learning was essential to Mac, and arguing or spirited debates, were two of his favorite things to do. Graduating from Concord, VT High School in 1956 his class dubbed Mac as most likely to enter an argument or debate. He then attended the University of Vermont, spending 2 years there in the Forestry Program, supplementing his cost of education working as a logger, however, he then changed schools to the University of Maine at Orono, being selected for an ROTC 2 year scholarship from the US Army. UMO’s Forestry programs Forestry Camp was located in Princeton, Maine with most of the classroom sites being on a nearby Passamaquoddy Indian reservation. Here he not only met his future wife, but developed truly life-long friendships with both local Tribal members and his fellow classmates. Mac even named one of his children after one of these friends, Jack who was the best man at his wedding.
Graduating from UMO with a Bachelor’s in Forestry in 1964, Mac was inducted into the US Army as a Second Lieutenant in the Field Artillery Branch. This began a 22-year career of honorable service that took him to multiple combat tours in Vietnam, Laos, and Thailand, overseas tours in Germany, and numerous assignments as both a Field Artillery Commander and Battalion Executive Officer, and Military Intelligence Brigade Executive Officer and MI School Instructor. During the Iran hostage crisis, Mac was at the National Security Agency and briefed top Pentagon Officials alongside the President on numerous occasions. Continuing his passion of Education, Mac earned his Master’s Degree in Public Administration from Central Michigan University, attended the US Army College, and Command and General Staff College. As his career drew to a close, Mac was selected to teach the Advanced Officer’s Military Intelligence curriculum at Ft. Devens, MA Military Intelligence Campus. Mac retired in 1984 as one of the most senior in-grade Majors in the US Army having held the rank of O-4 for almost 13 years. Major Downing’s awards included Bronze Star, Meritorious Service Medal, Army Commendation, Army Achievement, and Canadian Airborne Wings(though he never wore them) and many more.

After retiring, Mac returned his beloved home of Lunenburg, VT and elected to use his hard earned Forestry Degree and created his own company, Downing Forestry Consulting. He ran this company successfully for many years until health issues prevented him from doing the requisite field work necessary to create the custom Forestry Management plans he was known for.

Mac’s life in Lunenburg was not just as a place of employment, but where he fully invested his time and energy into his community. He served as a Selectman, School board, and member of the Republican local, county and state Caucuses. Despite having little political experience, Mac ran for the State Representative Office once and ran a campaign of integrity and honesty but was unsuccessful in his bid. With his military background, Mac was invited to speak at the Town’s Memorial Day and Veteran’s Day ceremonies in the late 1980’s and every year since then he continued to proudly speak of patriotism, civic pride, and reminders to fellow veterans of the value of their service to this great Nation. For the last few decades he used these speaking opportunities as a method of inspiring many with his messages of Patriotism and Civic Duty. One overarching theme was always to the younger generation to embrace our unique Country’s Values and Matters of National Interest as their civic responsibility and patriotic duty.
Mac was predeceased by both his mother, Jean, and Father, Frank, as well as his siblings, Bea, Gary and Michael, a niece Cheryl, grandson Anthony and great grandson Jaxson.
Surviving is his spouse of 41 years, Maren Downing, and first wife, Mary T Downing and their six children and their families, Cheryl Lola of Indian Township, Jack and Aina Downing of Gainesville, VA, Alberta and Molly Newell of Sipayik, ME, Paul and Margo Downing of Davie, FL, Annette Dana of Indian Township, ME, Christine and Richard Sabattus of Indian Township, ME. His extended family of Maren’s children and their families include Dan of Lunenburg, VT, Dianne and Jim Peyton of Lunenburg, VT, Jeannine and Keith Porter of Lyndonville, VT, and Teresa ad Stan Switser of Lyndonville, VT. Additionally, Mac is survived by his nephews of his Downing family, Gary Paul Downing, Mark Downing and family, and Trevor Downing and family, and Terry Lewis. Also his nieces Debbie, Joan, Crystal, and Karen. Mac is also survived many grandchildren and great grandchildren from his 2 marriages and loved to hear the title, Grampy Mac, in those excited voices from the oldest to the youngest.

Despite having no children of their own, Mac and Maren provided a place of love, joy, and safety for all their many combined family members, grandchildren and great-grandchildren at the Lake Camp on Neal’s pond and also the Farmhouse they made home for 38 years in Lunenburg, Vermont. The shared memories could be seen in the hundreds of photographs they had on their walls at camp and house as well as the many associated families’, grandchildren’s, and great-grandchildren’s social media platforms and photo albums.

Mac’s presence will be sorely missed in the years to come but the value of the memories he created in so many lives will resonate for years to come as well. Often telling his son, “no one gets out alive” is a truth we all must endure but it is what you do with the “dash” in those years between birth year and passing year that matter. Mac Downing made his dash matter and enriched so many lives along his journey during his time on this Earth. Rest in Peace, Sir you have earned your rest.

Due to the ongoing issues associated with COVID and many restrictions the family has decided there will be no services at this time.

To order memorial trees or send flowers to the family in memory of Malcolm "Mac" F. Downing, please visit our flower store.