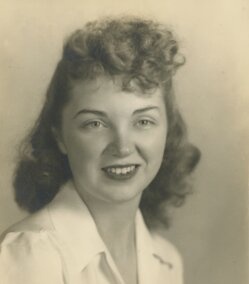 Meddybemps - Madge Orchard, 96, died at the Downeast Community Hospital in Machias Maine on the evening of March 18, 2021.

Madge was born on June 21, 1924 in St. Stephen N.B. Canada, the daughter of Grace Lombard Campbell of Meddybemps and Lewis J. Campbell of Calais. She attended schools in Calais and graduated from Calais Academy in 1941, and The University of Maine in 1945 with a Bachelor of Arts degree in Psychology.

After graduation, she moved to Belfast Maine where she worked as advertising manager for the Republican Journal. In Belfast she met her future husband, George L. Orchard and they were married on September 29, 1946 in Calais. Being ahead of their times, and much to the chagrin of friends and family, she and Lindy flew off to Boston on their honeymoon in a small plane from the Baring Airport.

Mom was a wonderful cook and homemaker, managing to make a comfortable home wherever her husband was transferred to as he rose in the ranks at New England Telephone. Over the years, home was in Calais, Machias, Dover Foxcroft, Portland and North Yarmouth, all in Maine. In 1964 the family moved to Derry NH when Lindy was promoted to New England traffic manager. In 1977, they retired back to Meddybemps and for several years spent winters in Florida.

After her husbands death in 1989, she moved permanently back home and spent the last 32 years enjoying life on the shore of Meddybemps Lake. She lived on her own right up to within a month of her death, and was grateful to be able to live independently for so long.

She is survived by her two sons, Jeffrey Orchard (Penney Lurie) of Charlotte Maine and Peter Orchard of St. Petersburg Florida. She is also survived by her grandson Zachary Orchard (Nathalie Ayotte) of Robbinston Maine who made her enormously proud with his 20 years of service in the US Navy. She kept an Atlas near her favorite chair where she followed his many voyages around the world.

She is also survived by her cousin Virginia (Rae’s) son, Eric Lombard Olsanski and his wife Susan of Fort Wayne Indiana and Meddybemps, and the children of her cousin and best friend Joy Lombard Frost, Timothy and Thad Frost and Tafi Frost Hazlett.

She was predeceased by her husband, her parents and both cousins along with many many family members and friends, to the point that she often commented that she was the last of her crowd. She especially missed Joy and Rae and also her friends Eleanor and Ron O’Neill of Calais. She was also predeceased by her daughter-in-law, Linda Shepard Orchard of St. Petersburg FL..

The family is very grateful for the care she received toward the end of her life from Dr. James Eschleman and his staff at the Calais Regional Medical Center, and Drs, Howard Grayson and Tom Ryan and the nursing staff at Downeast Community Hospital. We are also grateful for the friendship and support of Wendy Robinson and Sally Ketchen who visited regularly or spent time talking on the phone with her when the pandemic limited in-person visits. We are especially thankful to the Charlotte and Meddybemps first responders as well as the crews at Downeast Ambulance, who made her last trips to the hospital as comfortable as possible.

If anyone is so inclined, donations may be made in her name to the charity of their choice, or to the Charlotte or Meddybemps Fire Department. While plans are not finalized, a graveside service is likely to be held on June 21, her 97th birthday, at the Meddybemps Cemetery. Arrangements by Mays Funeral Home, Calais & Eastport.
To order memorial trees or send flowers to the family in memory of Madge Orchard (Campbell), please visit our flower store.