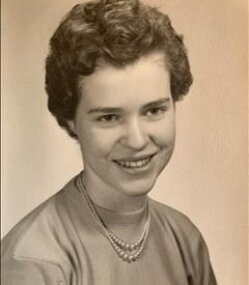 Leoniece was a high honor graduate of Calais Memorial High School, Class of 1960. She received her stenographic and bookkeeping diplomas from St. Croix Commercial College in St. Stephen, NB. She worked as a bank teller; but spent most of her career as a bookkeeper. Her most recent job was bookkeeper for 18 years at Scott-Wilson Funeral Home & Florist until the business was sold. She worked as a ballot clerk at City of Calais elections; as her mother had for many years.

Leoniece attended the First Congregational Church, Sunday School, and was a member of the Junior Choir. She taught Vacation Bible School and was Secretary of the Sunday School. Leoniece later was Treasurer of the Fidelis Club, a group of young women who had projects to donate funds to the Sunday School.

Leoniece was a member and Past Worthy Advisor of Calais Assembly #18 Order of Rainbow for Girls, and later received her Master of the Grand Cross of Color Degree in Augusta, Maine. She and her parents were the first family to join Orion Chapter #45 Order of the Eastern Star. They became members in 1963. Leoniece served as Worthy Matron in 1969 – 1970. Her father was Treasurer at this time.

Leoniece enjoyed bus tours in the United States and Canada with family and friends. She had a beautiful collection of dolls from many countries dressed in native costumes, including one she received from Princess Grace of Monaco. Leoniece also collected political pins, as well as advertising pens and pencils.

Leoniece is survived by her first cousin, Edith Richardson of Massachusetts, and several distant cousins.

Visitation will be held from 12:00 pm – 1:00 pm, Saturday, November 13, 2021, followed by a funeral service at 1:00 pm, at Mays Funeral Home, 26 Church St., Calais. Burial will then follow at Calais Cemetery.
To order memorial trees or send flowers to the family in memory of Leoniece Anne Kenison, please visit our flower store.