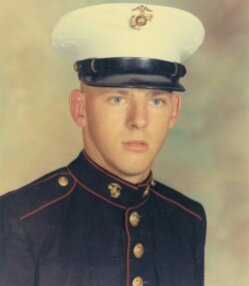 Meddybemps – Kenneth Dexter Gibson, 70, died at his home on Monday evening, May 11, 2020. Kenneth was born to Hermon and Margaret (Armstrong) Gibson in St. Stephen, New Brunswick on March 15, 1950.

Ken married Diane Turnbull on September 18, 1971 and together they made Meddybemps their home where they raised their family and enjoyed many wonderful years together. He loved being outside, whether it be hunting, fishing, gardening or just working on his tractor, Ken was happiest outside in the sunshine. Hosting barbeques with his friends and family was his favorite pastime and Ken was extremely proud to have served in the United States Marines.

In addition to his parents, Ken was predeceased by his eldest son, Travis Lee Gibson in 1991; and his best buddy, Sam.

He is survived by his wife and best friend, Diane Gibson; his son Jason Gibson of Meddybemps; two sister, Mary Greenlaw and her husband Dale of Waweig, New Brunswick and Jane Greenlaw and her husband John of Meriden, CT; five sisters-in-law, Alberta Pellitier and husband Romeo of Saint-Jean-de-la-Lande, QC, Ghislaine Wheaton and husband Roger, St. Stephen, NB, Lisette Black and husband Bill of Halifax, NS, Marielle English and husband Blaine of Saint John, NB, and Nancy Turnbull of Saint John, NB; a brother-in-law, Patrick Turnbull and wife Dorene of Cache Creek, BC; many nieces and nephews; his little buddy Brayden and his canine companion, Riley. Ken’s family would like to thank Barbara Townsend and Melanie Howard, RN for the wonderful care they provided to Ken.

A celebration of life will be planned for 11:00 am, Saturday, August 21st at Meddybemps Cemetery. Following the service, friends and family are invited to gather at Ken’s home, 152 Lakeview Farm Lane, Meddybemps. In lieu of flowers, donations in Ken’s memory may be made to the V.F.W., Post 9779, PO Box 1005, Calais, ME 04619, or to a diabetes organization of one’s choice. Arrangements by Mays Funeral Home, Calais & Eastport.


To order memorial trees or send flowers to the family in memory of Kenneth Gibson, please visit our flower store.

The home of Ken & Diane Gibson