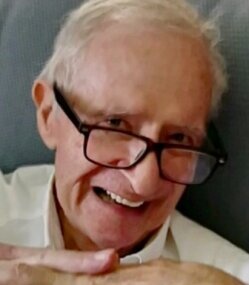 Machias – Kenneth Fredrick Buddington, 89, departed from this life on the evening of September 6, 2021. Kenneth was a Buddhist by faith. His soul is no longer tethered to this earth, he has set sail on his new journey.

Kenneth entered this world at his family’s home in Malden, Massachusetts on November 23, 1931. He was the fourth child of five children born to Percy Charles & Grace Louise (McDermott) Buddington. He was known as Kenny while growing up in Malden & Newtonville. Kenny was a natural born athlete and participated in many sports during his childhood. He graduated from Newton High School and enlisted in the United States Army, honorably serving our nation in the Korean War.

Upon returning to Massachusetts in 1953, Ken began working and pursuing his education in the Fine Arts field. While working in Boston in 1961 he married and became a father of a baby girl. Early in 1962, Ken moved his young family to New York. He began working for Popular Science magazine in Manhattan while taking night classes at The School of Visual Arts. He graduated with a bachelor’s degree in fine arts. Ken began his career as an Art Director after his graduation from college.

Ken had a love for the sea since childhood. As an adult his passion for the ocean carried over to activities such as swimming, snorkeling, scuba diving and sailing his boat. Ken also enjoyed softball, tennis, golf & skiing.

Ken enjoyed spending time aboard his sailboat in the waters off Halifax and sailing around the coastline of Nova Scotia. He began practicing Buddhism in his retirement years, he enjoyed the peace that his daily meditations brought to his life. Ken was a passionate reader throughout his life, a pastime that brought him much pleasure & joy.

In 2001 he moved to Brooksville, Florida where he lived until moving to Machias, Maine in 2019. Ken desired to be near the waters that brought him so much peace in his life. Downeast Maine was the ticket. Ken spent the last two months of the summer of 2019 exploring the Downeast Coastline with his daughter and they were joined by his son-in-law in late August. Ken especially enjoyed lunches & dinners at the Eastport Chowder House where he could sit on the deck watching sailboat racing, the lobster boats and mostly the Right Whales frolicking in the bay. In Machias his favorite place was Helen’s Restaurant, where he always finished his meal with their amazing blueberry pie.

Ken was a man of character, built of experience. Creativity and talent fostered, practiced and cultivated a history rich in years of culture, passion and determination.

Ken and his siblings lived at great distances across the United States, in adulthood, keeping in touch waned over the years. In 2019 Ken became aware of and was delighted in how large his sister’s family had grown. He so enjoyed seeing photos of his grandchildren, great grandchildren, his nieces, nephews, great nieces & nephews and great-great nieces and nephews. Though the distance was too far to visit with his extended family, he thoroughly enjoyed receiving letters from family and friends. He looked forward to phone calls with his family, especially his great grandchildren. Even though he was not able to meet any of his sister’s or brother’s children, he was so very proud of the adults they had become.

He was delighted to see the younger generation of his family enjoying sports as much as he did. Ken worked out at the Fit Club in Florida up until November of 2018. Ken developed a daily workout routine once again, when he was settled into his new home in Machias in 2019. He thoroughly enjoyed staying active with his daily routine until a knee injury this past July slowed him down.

Ken was particularly endeared toward animals; they had an innate sense of trust in him. No matter where heh lived, within a short period of time, he would find a cat or cats that had decided that they would be part of his life. He was a caretaker for many feral cats at his home in Brooksville over the years.

Our family would like to offer our heartfelt gratitude to the Staff of Maine Veterans Home, Machias, for their dedication & compassionate care they gave Ken during the last two years of his life while in his residency there. We would like to thank Shelly & her family at the Redclyffe Shore Motor Inn in Robbinston, Maine for the kindness & hospitality they showed our family during our extended stay with them in the summer of 2019. A special thank you goes out to Julie & her staff at Helen’s Restaurant in Machias for the kindness and compassion they have shown to Ken by delivering his favorite foods and blueberry pie to him during the past two years living in these Covid times.

A Life Celebration will be held at a later date at the Buddhist Center in Springfield, Illinois. In lieu of flowers, our family would like to ask if you would plant a tree in Ken’s memory or that donations be made to a local No Kill Animal Shelter, or a Cancer Research organization, or a charity of your choice.