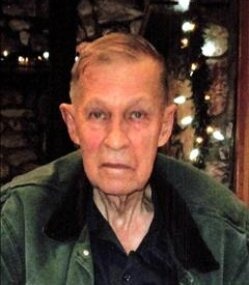 Cooper - Justin Philip Day passed away unexpectedly at Northern Light EMMC on April 9, 2022. He was born in Casco, Maine on November 13, 1935, the 4th child of the late Philip & Nellie (Small) Day.

After graduating from Calais Memorial High School in 1955, Justin was drafted to the United States Army’s transportation corps from 1958 to 1960. He hauled M60 US Army tanks and in the summer of 1960, he was part of a convoy of 200 US Army trucks traveling from Fort Eustis, VA through New York City to West Point, NY to support training of cadets. Although he was not called to active duty, he was on alert for a year at Fort Knox, KY due to the Berlin Crisis in 1960. He was again drafted to the transportation corps during the Vietnam War in 1961 and was discharged near the end of 1962 as Corporal SP4.

Following his military service, Justin returned to the family business and became extremely well known for being a Maine wild blueberry farmer, surveying properties and for a lifetime of service to the Town of Cooper. He was very proud to be the owner and operator of Day’s Blueberry Farm. After retiring from Woodland mill, his brother Willis officially joined him as a partner in the family business and together they were nearly inseparable.

Justin’s passion for Surveying brought him so much joy. He loved his maps and the very detailed process of walking through the woods to mark out the lines. He couldn’t say no to anyone who asked regardless of the season or weather. He knew everyone in town regardless of when they became residents and knew the location and measurements of their land from memory.

His service and commitment to the Town of Cooper meant so much to him. His dedication to his hometown led him to wear many hats over the years. He served as 1st Selectman, following in the footsteps of previous Generations. His family’s home served as the “Town Office” for many long years. He was a long-time member of the Board of Assessor’s, served as Ballot Clerk and Constable, was a member of the Washington County Democratic Committee, serving as chairman of the Cooper Democrats and an active member of the Grange. Up to the date of his death, he was a volunteer for the Town’s Fire Department and served as the Town’s Fire Warden. With his passing the Town of Cooper has lost an admired close friend and a valued way of life.

Although Justin never married or had children of his own, his love for his family was as obvious as was their love for him. Justin is predeceased by his parents, his sister Violet Dineen, his brothers-in-law Ralph Flood and Granville Lee, and nephew Daniel R Flood.

He is survived by his sister’s Arline Flood of Cooper and Louise Lee of Meddybemps, his brother Willis Day of Cooper, and brother-in-law Vincent Dineen of Meddybemps. He is also survived by many special nieces and nephews: David Smith and his wife Janet of Norway, Jay Smith and wife Joeleen of Bradenton, FL, Patrick Dineen and his finance Wanita Thibodeau of Baring Plt, Marcia Wheelock and her husband Paul of Calais, Ronald Flood and his wife Ann-Marie Flood of Cooper, Philip Flood and wife Karyn of Calais, Sandy Lyon and husband “Denny” of Cooper, Eric Flood of Silver City NM; Melissa “Missy” Alexander and her husband Dana of Baring Plt, Lori Jensen of Baileyville, Valerie Smith and her husband Sheridan of Baileyville, Heather Day of Cooper, Nellie-Jo Lee of Princeton, Granville “Robbie” Lee and his wife April of Baileyville, and special cousin’s Pauline “Polly” Spencer of North Ft Myers, FL, David Hunnewell of Charlotte, and Avery Hunnewell of Calais along with many great-nieces and nephew’s.

Justin gained a multitude of long-time friendships from his many years of service to the Town of Cooper, the Blueberry Industry, Washington County and the State of Maine. Although there are too many to list here, we know all who knew him will join his family in remembering him fondly. Never a negative word has ever been heard spoken of this selfless man. We can only hope that we all could be as kind-hearted and generous as he was.

A memorial service will be held 10 a.m. Saturday, April 16, 2022 at Mays Funeral Home, 26 Church St., Calais. Burial will follow in the West Ridge Cemetery, Cooper. In his memory, the family asks that donations be made to your local food pantry or Humane Society.

To order memorial trees or send flowers to the family in memory of Justin Philip Day, please visit our flower store.