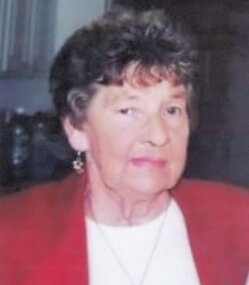 Joyce was a hard worker and held various jobs in Calais and St. Stephen area. Her greatest accomplishment she would say was her loving family. She watched over her grandkids and great-grandkids and was the best “Old Gram” any child could want. The stories of “Old Gram” taking care of the grandkids still bring a smile to everyone’s face.

Joyce was predeceased by her parents; three sisters, Mary Richards, Jackie Leavitt and Jean McCurdy; two brothers, Raymond and James Leavitt; and her beloved husband Donald Sellars. She is survived by her only child, Linda (Sellars) Clark and her son-in-law Mike Clark; two grandchildren whom she loved dearly, Shannon Carr and husband Mark, and Shawn Clark and wife Toni; and her four great-grandchildren that she was so very proud of, Josh Carr, Cassie Carr, Matthew Clark and Haylie Prickett. She will be missed by her loving sister, Ruth (Levitt) Johnson. She had many nieces and nephews that will fondly remember her for her laughter and spunk.

A graveside service will be held at a later date in the Calais Cemetery. In lieu of flowers, donations in Joyce’s memory may be made to a charity of one’s choice. Arrangements by Mays Funeral Home, Calais & Eastport.

To order memorial trees or send flowers to the family in memory of Joyce Wanetta Sellars (Leavitt), please visit our flower store.