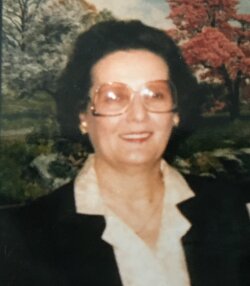 Joyce was raised in Eastport and worked at Guilford Mill for many years. On October 30, 1952, she married Clarence Matthews in Perry. She loved taking care of children and was proud to be a Foster Mother. Joyce was Baptist by faith and currently was attending the Second Baptist Church in Calais.

In addition to her parents, Joyce was predeceased by her husband, Clarence Matthews; a grandson Matthew Neptune; great-granddaughter, Bobbi Pendleton; four sisters, Jane Schantz, Patricia Rier, Maxine Seeley, and her twin sister Geraldine Scadova; and a step-son Clarence “Chuck” Matthews and his wife Ada. Surviving are her four children, Brenda Neptune and husband Sabatis of Pleasant Point, David Matthews and wife Lupe of Laughlin, NV, Michael Matthews and wife Juanita of East Machias, and George Matthews of Calais; a step-son Richard Matthews and wife Linda of AZ; nine grandchildren; many great-grandchildren and great-great grandchildren; two sisters, Ina Lank of CT, and Ruth McCarthy of FL; and many nieces and nephews.

A graveside service will be held 2 p.m. Saturday, June 13, 2020 at Hillside Cemetery in Eastport. Arrangements by Mays Funeral Home, Calais & Eastport.
To order memorial trees or send flowers to the family in memory of Joyce V. Matthews (Johnson), please visit our flower store.