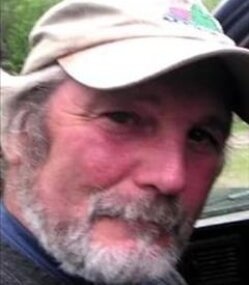 COOPER, ME- John Rocco Viselli, age 69, of Cooper, Maine died peacefully on Easter Sunday due to complications associated with cancer. John passed with loved ones by his side.

John was born on September 9th, 1952 in Providence, Rhode Island. He was the son of the late Rocco and Helen Viselli. He graduated from Pilgrim High School in Warwick, RI in 1971. Indicative of his boundless love for life, after high school, John traveled first across the U.S. on a van trip with his high school friends followed by an extended voyage to Europe where he worked on a vineyard in France and as a deckhand on a sailboat in Scotland. When he returned, he then rode a 3-speed Raleigh bicycle to Canada from Warwick, R.I.

Continuing with this adventurous trajectory, in 1976 John married his wife of 46 years, Teresa (Terry) Marcotte and together, inspired by the Helen and Scott Nearing memoir “Living the Good Life”, they moved to Maine in 1980 to build a family and homestead in Cooper on over 200 acres of wooded land close to beautiful Cathance Lake. The new region offered many activities which became family passions including land clearing and harvesting firewood, building the family home, gardening, sugaring, swimming, hiking, canoeing, ice-skating, and cross-country skiing. There wasn’t a season of the year where John and Terry were not busy enjoying the Maine lifestyle.

Throughout this time, John operated a masonry business with his sons for over 40 years during which they produced countless chimneys, fireplaces, walls, floors, and other masonry structures all throughout Washington County and beyond. John’s sons Lucas and Tom continue in his footsteps in the region.

In addition to his many interests, he had a passion for music and played many instruments including the guitar, bass, banjo, fiddle, mandolin, dobro, and pedal steel guitar to name a few. Most notably, with his Martin D-18 guitar and inspired vocals, he could sing almost any song he was asked and played for numerous pubs, restaurants, weddings, nursing homes, private parties, towns, and benefits. He was a member of many different bands over the years in a wide array of genres including country, classic rock, bluegrass, old time, and jazz. John valued these experiences and his extensive musical friendships throughout Maine and the U.S. He served for the past ten years as a selectman and as a member of the planning board for the town of Cooper.

During his illness, John was extremely grateful to have incredible support from his wife Terry, his immediate and extended family members, his endearing friends, and Northern Light Cancer Care.

John is survived by his wife Terry, son Joseph and wife Jessie of Richmond, ME, son Lucas of Cooper, ME, son John Thomas and partner Stacy of Cutler, ME, and son Anthony and wife Erin, of Bangor, ME. He was a loving Grandpa to his seven grandchildren, Isabella, Sonya, Max, Lila, Silas, Helene, and Andre Rocco Viselli. He is survived by his siblings, Jeff Smith and wife Marcy, Tina Connor, Linda Williams, Susan Reilly and partner Noel, Mark Viselli, and the late Marion St. Pierre. He was a loving uncle and great uncle to his many nieces and nephews. John leaves numerous friends who were touched by his spirit and joy for living. He will be dearly missed.

A Mass of Christian Burial will be held on Saturday, April 30 at 11 AM at Saint Gregory the Great Catholic Church on 360 Cowesett Road in Warwick, Rhode Island. A gathering will follow the Mass at 12:30 at the Pinehurst Golf Course, 25 Pinehurst Rd., Carolina, RI. Arrangements have been trusted to Mays Funeral Home of Calais, Maine; memories and messages may be shared with the family at www.MaysFuneralHome.com
To order memorial trees or send flowers to the family in memory of John Rocco Viselli, please visit our flower store.