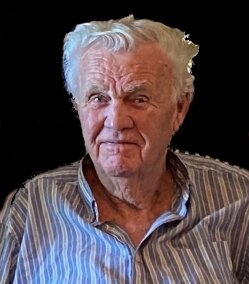 Jack graduated from Calais Academy, class of 1949. During high school he worked at Alexander Buick until enlisting in the U.S. Navy. Jack served from 1949 to 1953 during the Korean War, stationed aboard the USS Wright (CVL-49). On September 1, 1951, he married Sadie “Sally” Stuart. Following his military service, he returned home to Calais and worked for New England Telephone and then did some work on large construction projects in New York, Connecticut, and Maine. In 1961, he started his own electrical contracting business. Jack was truly one of a kind, with an unmatched work ethic and strong business sense, and as his business grew, he started Border Electric and found success in commercial and industrial electrical contracting. In 1974, Jack and his wife Sally purchased the major appliance arm of Eastern Maine Electric Cooperative and began selling General Electric products. Both businesses expanded throughout the years and are still active today, with many family members participating. Along their journey together, Jack and Sally also owned gas/service stations, various commercial and residential rental properties, and a convenience store.

Jack was a long-time member of St. Anne’s Episcopal Church in Calais. He was a former member of the International Brotherhood of Electrical Workers, IBEW Local Union 222 & 1253, and a nearly 65-year member of the American Legion.

Jack loved Calais and donated much of his time and energy to support local causes where his expertise and/or resources would be helpful. He had a great ability to understand how mechanical things worked with special interest in antique cars, his favorite being Buicks. He also liked to spend time at and work on the “big camp” in Charlotte, which he built on land that once belonged to his grandmother Smith. He loved classic country music, westerns, and buying and selling trucks, but all his interests were overshadowed by his love for and support of his family.

Jack was very respected and loved in his community. He never wished for nor wanted accolades for his countless selfless acts, and many of the good things he did were done quietly. One public award was the Paul Harris Fellow from the Rotary International “in appreciation of tangible and significant assistance given for the furtherance of better understanding and friendly relations among peoples of the world.” Jack also received numerous recognitions from the City of Calais for his support of City operations.

In lieu of flowers, donations may be given to any of the following in Jack’s memory: St. Anne’s Episcopal Church, Calais Lions Club, Calais Lioness Club, or PAWS Animal Shelter.

Due to Covid-19 restrictions, there will be no public service at this time. Arrangements by Mays Funeral Home, Calais & Eastport.
To order memorial trees or send flowers to the family in memory of John Willard "Jack" Smith, please visit our flower store.