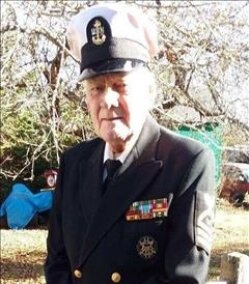 John graduated school in Auburn and enlisted in the U.S. Navy at the age of 17. He served as a lithographer, retiring in 1977. Following his service, he moved to New Hampshire where he worked as a printer. In November 2007, John moved to Dennysville to live closer to family and enjoy his retirement. He worked part-time as an auctioneer and was an avid outdoorsman, enjoying hunting, fishing and being a member of the Dennysville ATV Club.

Surviving are his two daughters, Kathi Wolcott and husband Robert of Dennysville, and Brenda Prime of South Mills, NC; and numerous grandchildren and great-grandchildren.

In keeping with John’s wishes, his cremated remains will be buried at sea by the U.S. Navy. A Celebration of John’s life will be held at a later date. Arrangements by Mays Funeral Home, Calais & Eastport.
To order memorial trees or send flowers to the family in memory of John Charles Prime, please visit our flower store.