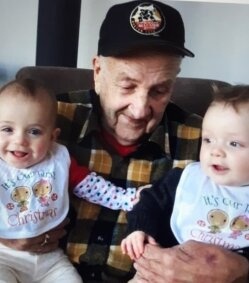 Having grown up in Milltown, John eventually moved to Maine where he married Jean M. O’Neill and together, they raised their two daughters. He was a dedicated husband and loving father who always put his family first. He was a member of the Masonic Lodge and worked for many years at the Woodland mill. John also spent 26 years as the crossing guard for the students at Calais Elementary School, a position he truly loved.

In addition to his parents, John was predeceased by his wife, Jean Monaghan; his beloved grandson, Jeremiah “JJ” Childs and two sisters, Marilyn Clowater and Carol Jones.

He is survived by his two daughters, Debbie Flood and very special son-in-law Nelson of Calais and Karen Childs and her husband Gregory of Scotchridge, NB; his special grandson, Travis Childs and his wife Kate of St. Stephen, NB and Jordon Flood and his wife, Kelli of Eastport; great grandchildren, Claire, William, Ivory and Tannar; brothers, Charles and Duane Monaghan and sisters, Betty Cotter and her husband Terry and Eileen Ingram.

John will be buried with his wife at Calais Cemetery at a later date. In keeping with his wishes, there will not be a memorial service. Arrangements by Mays Funeral Home, Calais & Eastport.
To order memorial trees or send flowers to the family in memory of John Whitney Monaghan, please visit our flower store.