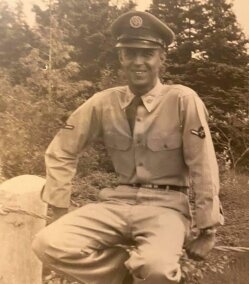 Dennysville – John “Jack” Brown, 88, passed away peacefully on November 3, 2020 at his home on Bunker Hill surrounded by his family. He was born in Dennysville, Maine on Aug.12, 1932 to Hazel (Ward) & Harry Brown. He attended Dennysville schools, graduating from Dennysville High School. Upon graduation, he served in The United States Air Force. He married Marion (Hood) Brown in 1954 and they shared many wonderful years together. They raised their only son, Rickey Brown on Bunker Hill. Their years were filled with extended family gatherings, many of which, were held at their camp on Orange Lake. They were active in Square Dancing and also enjoyed traveling - many trips to Augusta to spend time with family. Jack owned and operated Brown Bothers’ Trucking Company with his brother Wallace his entire working career.

He is survived by his only son, Rickey Brown and daughter-in-law, Susan. A granddaughter, Heidi Hicks and her husband, Chris of Alexander, granddaughter (as well as his devoted loving nurse until the very end) Heather Turner and her husband, Wes of Bangor. Great-granddaughters, Chandler & Camryn Hicks and great-grandsons, Cole, Chase, Christian Turner and Eli Bradford. Jack is also survived by his stepchildren and grandchildren, whom he gained as family when he married Janet Rice of South Berwick in 2004. He will also be remembered fondly as, ‘Uncle Jack’ by nieces and nephews whom he loved immensely. Jack had a special bond with his nephew Brandon Hood and his family of Middleton, MA.

In addition to his parents, his wife Marion and wife Janet, he was predeceased by all his siblings and his beloved in-laws, Ralph & Phylis Hood.

At Jack’s request there will be a graveside burial service for immediate family members at 1:00 pm, Sunday, November 8th at Dennysville Cemetery. Friends and extended family who wish to attend are welcome and encouraged to be with us from afar at the Cemetery by parking and observing the service from a vehicle.

In lieu of flowers, donations to The Dennysville-Edmunds Congregational Church can be sent to: Linda Seeley 570 South Edmunds Road, Edmunds Township, ME. 04628. Arrangements by Mays Funeral Home, Calais & Eastport.

To order memorial trees or send flowers to the family in memory of John B. "Jack" Brown, please visit our flower store.