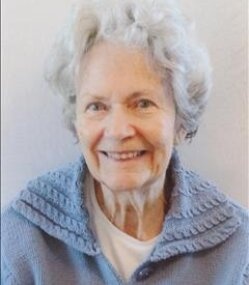 Our beloved mother, grandmother, and friend - known to many who loved her as “Jo-Jo,” slipped away peacefully from the constraints of Alzheimer’s disease on June 9th 2022 with family by her side. In her last years she had been looking so forward to reuniting with her loving parents and seeing all her many furry companions again., She wanted to take on the role of an angel -looking over her children and grandchildren - and lending her beautiful soprano voice to the angel choir.

Joanne was born on Easter Sunday, April 16th 1933. She was the only child of Richard Herzog and Helen (Bolmes) Herzog and grew up in the city of Milwaukee, Wisconsin. In 1955 she married Daniel Fuss and had many happy years raising her four children in Milwaukee, then Lake Bluff Illinois, and then in Wellesley Massachusetts. After her divorce she wanted to live near the ocean first in Marblehead, Massachusetts and then Cape Cod. After some time in New Jersey with her daughter, Diana, she moved back to Cape Cod. She loved the beach and the ocean!

Joanne spent many years working as Director of Relocation Services for Realty World, enjoying meeting many people on her business travels around the area. She enjoyed early New England history and her bubbly personality and passion for her topic made her an extraordinary docent at several historic homes in the Salem Massachusetts area. Joanne had a keen aesthetic sense and always designed her homes to be warm, inviting, country-inspired spaces. She was a talented painter in the country primitive style and her family treasures the pieces she made for them.

Her grandchildren called her Jo-Jo and in later life it was the name that she preferred. In 2015, as dementia began its cruel advance, she relocated to Eastport Maine to be close to her daughter, Linda. While Alzheimer’s took much away from Jo-Jo, it never stole the sparkle in her bright blue eyes or that smile that could still charm your socks off - even at 89 years old!

She will be forever remembered by her children: Linda Courtney and husband John Newell of Edmunds, Maine; James Fuss and his family Tom Ponpan and Nuna Papassara in Thailand; Diana Fuss and husband Jim Eatroff of New York and Princeton, NJ; and David Fuss and wife Debra of Princeville, Kauai. She adored her grandchildren: Pam Kapitulik and husband Brian, Jeff Stylos, Joe Stylos, Melissa Stylos, Jenny Fuss, and her great grandson Cameron Johnson.

The family wishes to thank the Eastport Nursing Home for the excellent and compassionate care they gave to Jo-Jo over the last few years. A celebration of life is planned for a future time. Arrangements by Mays Funeral Home, Calais & Eastport.
To order memorial trees or send flowers to the family in memory of Joanne Lillian Fuss, please visit our flower store.