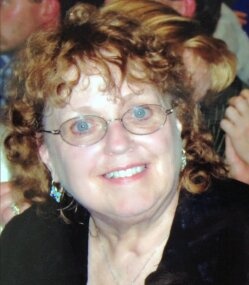 My mother Joan Marie Corning, 73, of Calais, Maine passed away on Saturday January 11th under Hospice Care at Eastern Maine Medical Center in Bangor. She was the youngest of four children, born November 9, 1946 to Ross and Christine Mowatt. She grew up and lived most of her adult life on Price Street. My mom was a homemaker at heart, who opened her home and her heart to friends and family. She loved to entertain, host card games, plan events for her Calais High School class of ‘65 classmates, and feed everyone (and serve up a drink or two). She had a remarkable gift to connect with the people around her, including her fellow residents and the staff at Colonial Nursing Home in Lincoln, Maine where she had lived since 2014. Her Lincoln nieces Jackie Page, Pam Page, Lynette Leighton and their children helped make mom feel ‘at home’ in their hometown. She spent her last Christmas with them a few weeks ago.

In 1986 we watched her defy the odds after a massive head injury. Her recovery was a testament to her fighting spirit and her will to live. She was forever grateful for the friends and neighbors who established the Joan Corning Rehabilitation Fund to cover the cost of home nursing care and rehabilitation that helped her get back on her feet. Several years later she would donate the remaining funds to a teen-aged head injury survivor to help pay for his care. Mom was ‘paying it forward’ before we even knew the term. And she never failed to remind me to live life to the fullest, because she knew firsthand you never know what tomorrow holds. In fact, despite her own limitations she embraced the chance to visit me all over the country as I built a life and career of my own. She was almost 50 when she took her first flight and kept racking up miles traveling to Ohio, St. Louis, Seattle, Dallas, and New York City. Mom often flew alone making friends with the airline attendants who assisted her along the way.

I felt blessed to hold her hand in those final minutes as she listened to ‘Take Me Home Country Roads’. Also with her was my dad and her husband of 28 years, Arnold Corning. He was her beloved friend and caretaker even after their separation, with the support of his life partner of 23 years Barbara Clark. Also with her, niece Jackie Page and her husband Jeff.

Pastor Mitch Bickford and his wife Brenda kept vigil with us, assuring us that mom believed this world was not her permanent home; she was just passing through.

While ‘passing through’ to the next great adventure my mother Joan Corning touched many lives, and will not be forgotten. May she rest in peace.

A celebration of Joan’s life will be held in the summer. In lieu of flowers donations can be made in Joan Corning’s name to the Brain Injury Association of Maine at www.biausa.org Arrangements by Mays Funeral Home, Calais.
To order memorial trees or send flowers to the family in memory of Joan Corning (Mowatt), please visit our flower store.