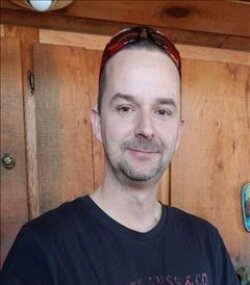 After attending high school in Waterville, Jerald worked as a stern-man on a lobster boat and later as a form carpenter with Coastal Concrete until being diagnosed with Hodgkin’s lymphoma. After two courageous battles with cancer, Jerald returned to work as a carpenter. Jerald loved the outdoors and enjoyed fishing and riding his motorcycle, but most importantly he loved spending time with his children. Jerald was an in-active member of Lewy’s Island Lodge No. 139 A.F. & A.M. in Princeton. Jerald was a free spirit and was able to put a smile on the face of everyone he met.

A Celebration of Jerald’s life will be held Saturday July 31, 2021 at the home of his parents in Big Lake Twp after a memorial service at Sunrise Christian Church in Big Lake Twp that will start at 1:00pm. Arrangements by Mays Funeral Home, Calais & Eastport.
To order memorial trees or send flowers to the family in memory of Jerald Donald Stevens, please visit our flower store.